I HAD to do this summit !
As soon as the new summits for EA6 were announced, I had to start planning all over and see which ones I could be the first activator. One summit caught my attention immediately. On some maps this summit is called Puig des Racó (not Recó).

Being a member of the Radio Amateur Club of Ostend (RACO) ... what better choice ?

As it turned out, this was a fairly easy summit too. The road from Artà is nice, no bumps or potholes this time, and it leads to a nice parking spot under the trees (take the higher level of the parking).
Position 39.714925, 3.388276
Take the small gate straight ahead, not the bigger gate to the left of the parking.
From there it's fairly easy, only notice the stone man along a fence, there you go right.


On the summit is also a cabin where some person may be watching the whole region for fires and other dangerous situations. In my case it was a man (but on his radio I also heard a female voice).
I had a nice chat with him and he was very friendly, I guess he was glad to see somebody ... it must be a lonely job .. at the top. If only he were a ham, he could do SOTA every day ! HI 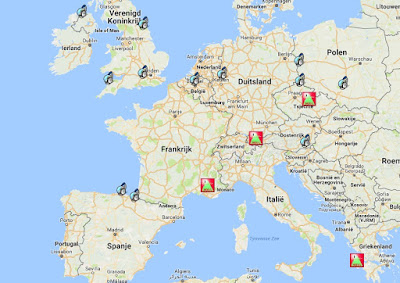