Going home ... through the Black Forest

I left Berg near Ravensburg around 8:30 local time, and had planned 3 summits in the DM/BW region. 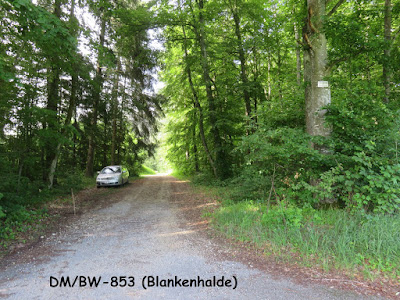 But to stay out of sight from the main road, I set up my station in a small side-road a bit further, to the left behind my car.
I had put my fishing pole at one side of the road, and my chair at the other side, so that the antenna wire would not be too close to the foliage.

I had just made a few QSO's when a large pick-up truck with a trailer came into the woods, and not only that, but he wanted to back up into the side road where I was sitting !
It turned out I was at the entrance to a meadow, and the three  men in the car came unloading a few sheep there ... 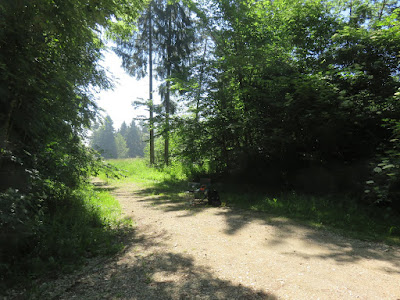 I could quickly pull the fishing pole from its stand, and put it on my side, so that they could pass.
They were very friendly, and when I told I came from Ostend, Belgium, one of them told me he had taken the boat from Ostend to Dover once ... must have been long time ago, since the ferry to Dover has ceased to exist in 2013. 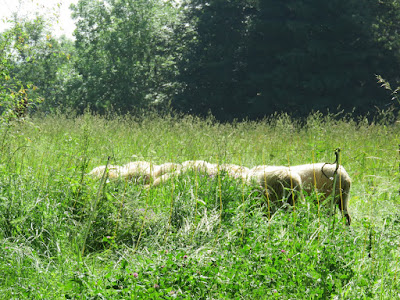 Just when I was packing up, these men returned with another load of sheep, their trailer could only hold some 5 sheep at a time.
The same man that spoke to me earlier said he had seen another "fisherman", not too far from where I was. So after my activation I went to look who that might be ... ? 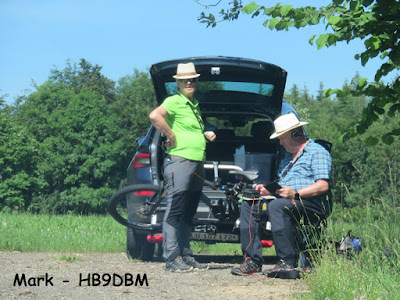 I turned out to be Mark, HB9DBM and his xyl,
Mark is a well know activator and chaser, which I had met several times on the air, but never in person. Mark was using the KX2 and also an endfed antenna, but a much longer one than I use, and stretching it over two fishing poles.
After a nice but short chat, I had to move on to my next summit ... 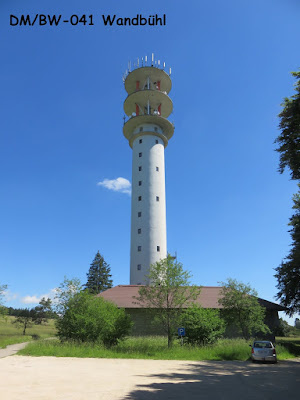 This was a new summit for me, since the nearby summit of Rainen (DM/BW-042) had been replaced by this one. I had chosen this parking spot : 48.165644, 8.794488
It is near the transmitter tower and a nice "Huette am Turm".
The Huette is closed on weekdays, but luckily I had brought my picknick, but that had to wait till after the activation. 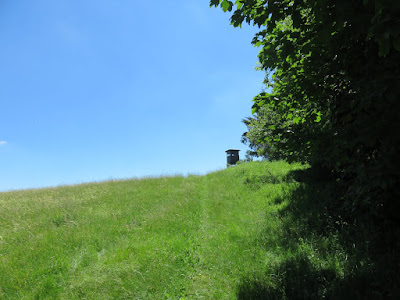 I followed the tracks shown by OSM on my phone, the first part is quite a long stretch of paved road, before you take a trun to the right and get into the woods.
I passed by a nice cabin with a bench, but according to OpenTopoMaps, it's just outside the AZ, so I continued to the summit.

Just before the last part of the track, I saw a steep shortcut to the left, where they had cleared some trees. I decided to give it a chance because I saw some open air and a lookout tower.
But when I reached the tower, it was so hot already , I decided to go back into the woods, and setup there. 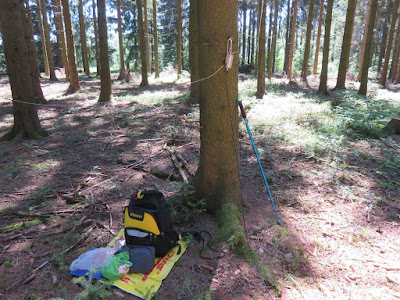 So after some detour, I ended in the middle of the woods, and I could set up my station.
The only problem were the immense amount of FLIES !
So after only 10 QSO's (with 3 S2S) I packed up and wanted to get out of that place as quickly as possible.
And then it happened ... in my haste I must have dropped the DC-cable for my KX3 on the ground.
It's only some 25 cm long, one end has PowerPoles, the other end fits the round DC input of the KX3.
Of course, I only noticed this when setting up on my last summit.
Lucky for me, I always carry some items in double, and an extra DC-cable is one of them !
I started this amusing thread on the SOTA Reflector about the "lost cable" ... enjoy the serious and the silly responses to my post in Geocaching on Wandbühl anyone ?.

Back at my car, I first had my lunch, with a nice view of the transmiiting tower.
Next to my car was one more car, but with a German license plate.
I made the (wrong) conclusion that must have been the (rental) car that Markus used, so I grabbed a piece of paper and wrote some short message about being on the same summit and 73 GL etc ... and put it behind the windshield wiper on that car. As I found out later, it wasn't Markus' car, so some German will have had a tough moment deciphering my cryptic message hahaha.

Third and last summit of a day that was getting very hot .... 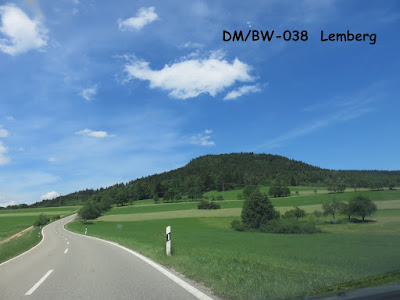 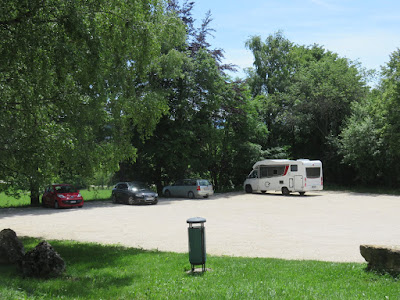 Just after I started walking, I saw a couple coming down the forest road ... nothing special, I see more couples taking a walk in the woods ...
But this one was special, the man had a fishing pole in his backpack !
The man must have noticed my fishing pole as well, because almost at the same time we said something like "You a ham?" haha
And yes, this time it WAS Markus HB9BRJ, and his xyl Lucie HB3YHR, who had just activated the summit.
We had a short chat, and then I did the climb to the summit.
Halfway, there is a nice viewpoint, so time for a picture and some water. 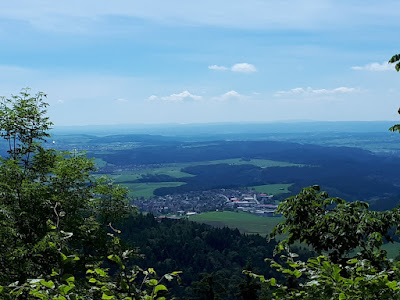 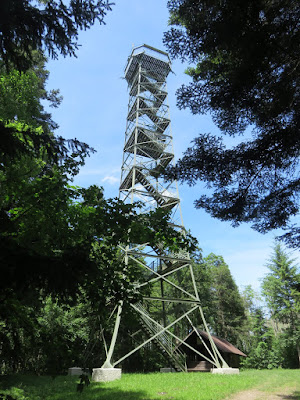 Finally , at the summit, there is a lookout tower, but I didn't climb it, it was getting near 30 °C ! 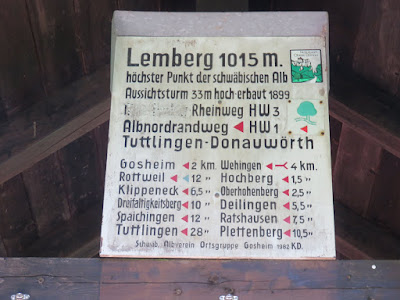 Also, most of the benches were in the sun, so I chose a spot in the shade of the chalet.
I could fix the balun to the roof, and the endfed to the 6m pole. 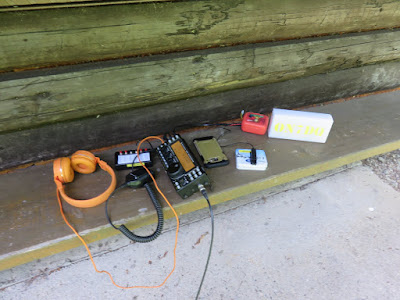 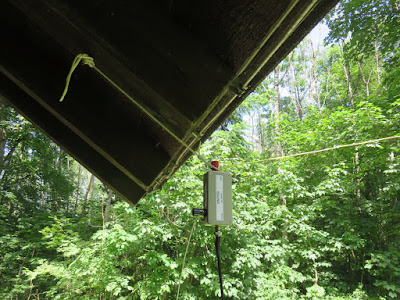 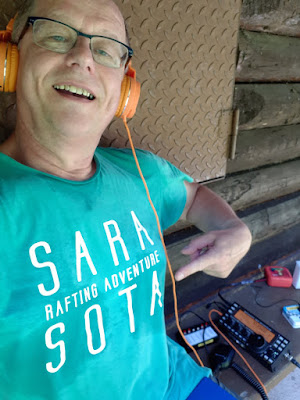 And Markus guessed it right, of course I was wearing one of my special SOTA T-shirts, hi !

After this, I drove to my BnB near Hagenau in France, from where I was going to attack some more FL/VO summits the next day ...

Continue reading ... go to DAY 8
or
Go back to overview HERE