For this summit, I had carefully studied the report by Phil, G4OBK.
Still I landed on the wrong place, my GPS wouldn't lead me into the dirt road leading to the summit.

After a while one has to take a left turn, and this asphalted road is in perfect state, very strange ... it's like driving through a wormhole into another era ...
(and note : the dirt road is on Google  Maps, the asphalt road is not !)

From the parking , the path to the summit looked very promising ...

But after a while, there is no more path (or at least none that I could see ...) , so you're left on your own , and have to scramble over the rocks until you reach the summit.

I guess it's all part of the adventure, but doing this all on my own, I found it a dangerous endeavour, and would avoid this summit on a next visit. Too much risk and trouble ... for only one point ? No thanks !

Still, the view from the top is nice, any ham will enjoy looking down on the radio towers on the other part of this summit, and all the QSO's you make are the icing on the cake, right ?

On top of all the GPS and climbing trouble, the sun was burning as hell, so I tried to blend in with the rock on the background .. hi
Here a map of my QSO's (from Log2Map by ON6ZQ): 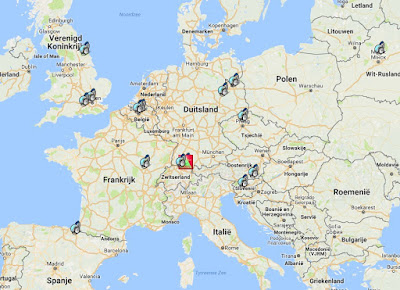 So I can confirm what Phil wrote in 2015, there is no preference in which side to use, they are in equally bad state (and certainly worse than in 2015 ... hi).