I wanted to attend the DIRAGE in Diest, some 170 km from my home.
This ham rally is one of the larger ones in Belgium, hosted by the UBA section DST (see info here https://dirage.be/).

At the rally , Peter ON4UP had promised to organize a meeting for Belgian SOTA activators. So this was the chance to meet in person some of the people I had never seen in my life, but may had worked in a S2S qso, or chased from home.
Peter was also setting up a booth about SOTA, to "spread the word ...".

I combined this visit with a couple of SOTA summits of course.

I was also lucky to visit one of my ex-students, Bart ON4DGT, who lives in the area, and meet his lovely family. They even let me stay the night there, saving me the price for a hotel or BnB. 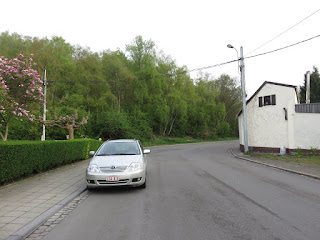 The entrance to the wooded track is somewhat difficult to find, but it is where the Rue Sergent Merx meets the Rue Naniot. There was a track on OSM, but the first part is overgrown, and people have made a shortcut which you better use. See map below. 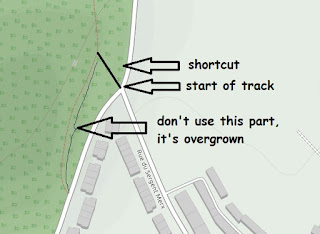 There is a good track by G4OBK on the SMP site.

At the summit, there are plenty of places to set up. I was there early morning, and while setting up,  a fox came looking what I was doing there ... unfortunately I was too late to take a picture of it.
So I used a lttle bit of trickery ... can you notice that I'm no good at PhotoShop ? 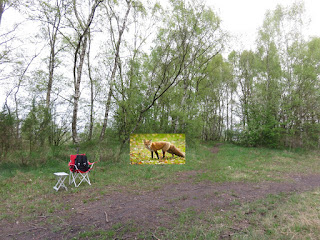 This is one of my favorite summits in the area, and since it is now the only remaining summit in the South of The Netherlands, I just had to pay it another visit.
If you drive carefully, you can get to this parking spot : 50.812408, 5.682566

The road starts in the village of Kanne (in Belgium): follow the Bovenstraat south, it turns into a 2 stripes of  concrete called the Castertweg, drive this slowly to the end, and park to the right, just before the prohibition sign.

Now you will have to walk the gravel road, the first part is still called Castertweg, then at the junction, continue straight ahead, now it's called the Silexweg. Keep following it according to the map below, until you reach the old parking spot. It will take only about 10 minutes more than before, a good exercise, hi. 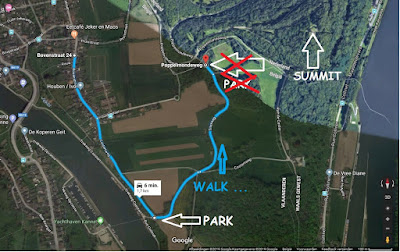 If you don't like doing the last steep part with the stairs, you can make a detour around the summit and reach it on a gentler slope. Just watch out for the mountainbikers who use this summit a lot, especially on weekends. 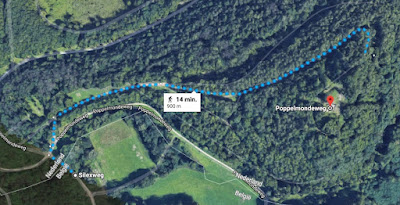 Here some views along the track.

The three way junction where you have to take the middle one ... the steepest of course ! 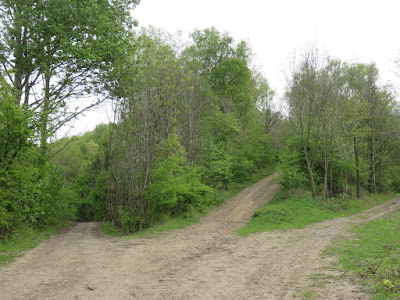 And here comes the Stairway to "SOTA" Heaven ... at the end you're on the summit. 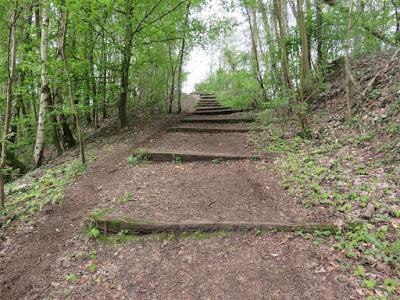 Enjoy the views in 5 directions ... (here the castle Chateau Neercanne) 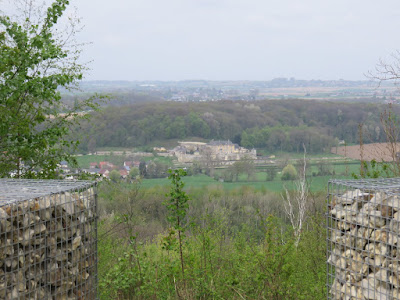 There is plenty of space to set up, I used a nice bench near the trig point.
I fixed my fishing pole with link dipole to the back of the bench with bungee cords, and set up the KX3 on the bench. 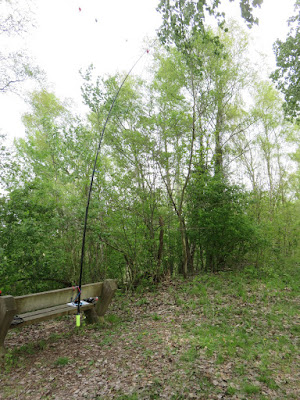 This time the chasers were well awake !
I started calling at 09:00 UTC, and ended the activation 1 hour and 30 minutes later, with 40 qso's in the log, including two S2S.

Leaving the summit at 10:45 UTC , I still had one summit on my list ... but first went for some food in a nice restaurant in Kanne. I won't publish my "secret address" here, but here's a hint : they serve yummy ICE CREAM too ..  (send me a mail if you can't figure it out ;-) 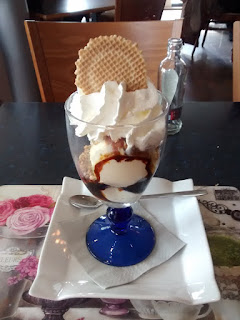 This summit is best done on a weekday. Free parking is at the Luminus Arena , a football stadium.
Park here : 51.006741, 5.537109 , this is close to the start of the track.
In the weekend the parking lot will be full, maybe not free, and full of football fans, and not sure if they love SOTA ...

The first part is a nice and easy walk, but the last part is really steep, the soil is loose and mainly coal dust ( a "terril" is a slag heap, there are links with info in the SOTA Database).
If you have a walking stick (or 2) , it will be handy to take it with you.
I went up in 25 minutes, and back at the car in 20 minutes. 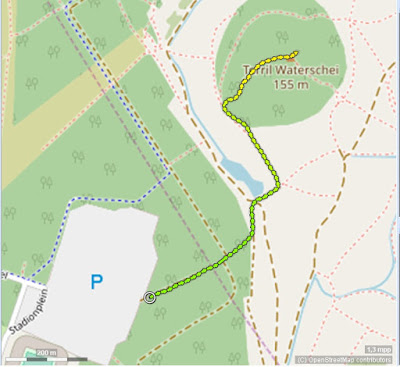 There is not much room at the summit, but the 360° view is very nice.

First I tried some 2m FM with a roll-up Slim Jim that slides over the fishing pole.
Using only 5W from my FT1D resulted in only one qso, so I quickly switched to HF.

Setting up a link dipole is a bit tricky, I had to descend the summit a little both sides, to reach a tree where I could tie the end ropes. A vertical or endfed that needs only one fixing point would be easier on this summit.

Also my ground anchor didn't go deep into the ground, so had to use some bungee cords again. 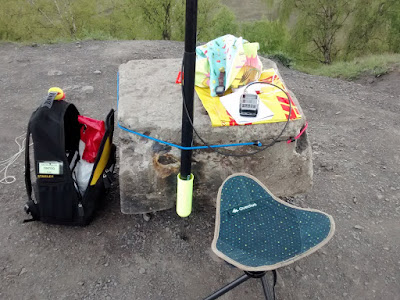 And that was the end of day one of my short trip ... continue reading in part 2 here