If you haven't read the report on this one by Phil, G4OBK, read that one first !


50m further is the start of the road to the summit. I say ROAD, because after I started walking,one car after the other passed me by ... so I guess if I had "blinked" for a second and supposed I hadn't seen the sign, I could as well have driven to the summit ... hi.


Still, the road was in good shape, and it was good excercise, walking time abt 30 minutes.
On the summit is a radio tower, and two men were  installing or adjusting some antennas.


The massive trig point gives a lot of shade, which was very welcome because it was another hot day.
I had enough space for my link dipole, and I could have mounted it on top of the trig point, but I would not have had enough rope to fix the ends of the dipole in a decent angle, so I left it on the ground.


Activation went well, and I was happy to log 2 DX contacts.
Here the map of mu QSO's  (from Log2Map by ON6ZQ):

After the activation, I did climb the "vertice" and it must have been the first time I could look DOWN on my antenna , hi. 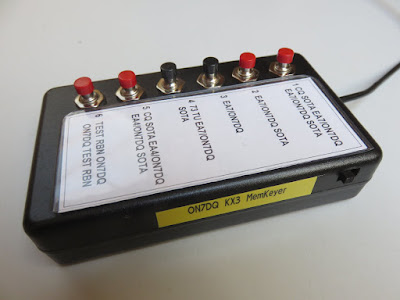