On this day I had to move from one AirBnb place in El Goro to another one in Santa Brígida, and I had planned to do 2 summits, so I had quite a busy schedule !

April 21st was also the day of the EU<>NA SOTA event, so I didn't want to miss that. 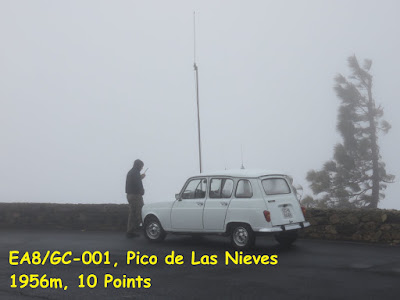 NOTE : both Google Maps and the SOTA database show an incorrect location of "Pico de Las Nieves", that location is only at 1890 m altitude, so it is not even in the AZ.
The real peak is at 1949m, so the reported altitude of 1956 m is also wrong !
More precise information can be found here

As the name says, this summit can be covered in snow, or if you don't see any snow, it can still be very cold up there.
I was there at the end of April, and temperature was +2 °C, but with the wind chill factor ... it was freezing cold ! 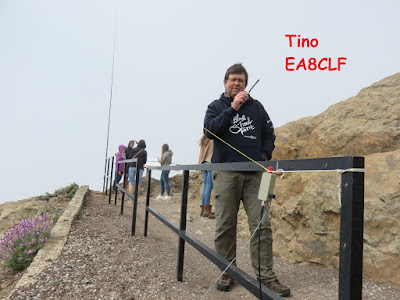 To my surprise, I arrived at the summit to find another ham already had set up at the parking spot.
It turned out to be Tino, EA8CLF ("Canarian Liberation Front" ;-)
He was not there for SOTA, but had setup a repeater in his car, with a vertical antenna on a pole next to the car.

The repeater was to be used for a car rally on neighbouring island Tenerife ... some 100 km away !
As it turns out, hams from the South of Tenerife cannot easily communicate with the North of the island, but they can work each other via this repeater at 2000m altitude !
Radio waves work in mysterious ways ... 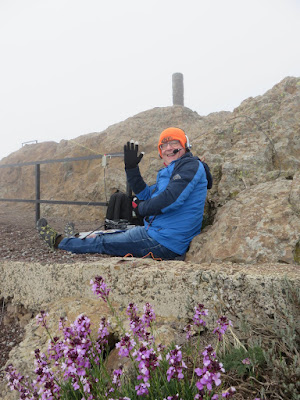 After I explained to Tino what I was doing with the stuff in my backpack, he didn't lose sight of me and wanted to know all about SOTA. He showed me a nice spot to setup and keep myself  a bit out of the cold wind .. and also served as my personal photographer ... resulting in a whole bunch of pictures, more than I can show on this page. Thanks a lot Tino !

He also gave a valuable tip on going to my next summit, as you can see in my report about EA8/GC-003 Moriscos. 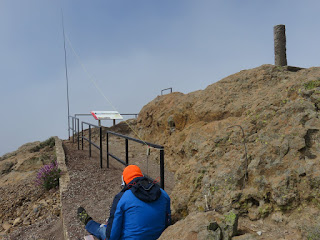 After tying my fishing pole to the railing near the vertice, and fixing my enfed I started calling at 09:45 UTC. Conditions were not very good, in one hour I only managed to make a mere 12 QSO's, most were on 20m CW and SSB.
But I was still happy, as 3 of those QSO's were S2S.

After being on the summit for over 2 hours, I was getting wet and cold and it was time to move to my next summit ... and put on the heating in the car ... yes,  this is also Gran Canaria !

or Back to overview