After driving all the way to Friedrichshafen, I thought that I could as well take it a little further into Austria and Liechtenstein. So on Sunday morning I set off for my first summit 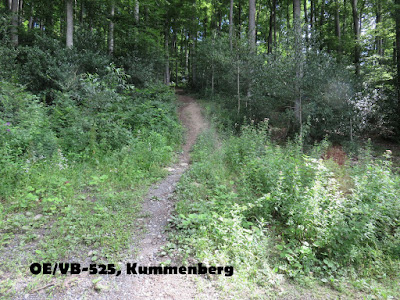 To avoid the toll highways in OE, I took some local roads, so the trip took a bit longer than expected but I had no problems. I got a good starting point from Matt HB9FVF, so I parked my car at the climbing garden in Koblach, at position : 47.331196, 9.610010.
From there it took me about 45 minutes to the summit. The path was not difficult to follow, but of course, the closer tot the summit, the steeper it gets ... but the magnificent view makes up for all the walking. 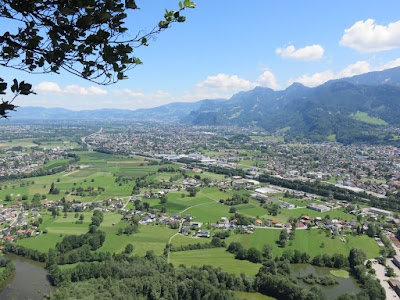 Michael, DB7MM informed me that on this Sunday, there was a German GMA Contest on VHF, so I decided to take my FT857D and a 4-element logperiodic to do some contesting ...
This was my setup, at a nice bench in the shade. 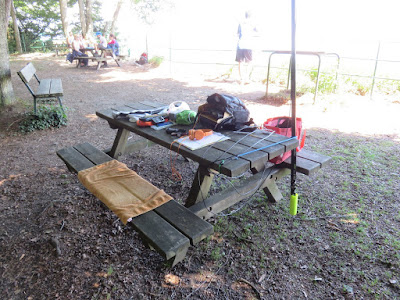 The antenna was mounted horizontally on the fishing pole, around 5m above the bench. 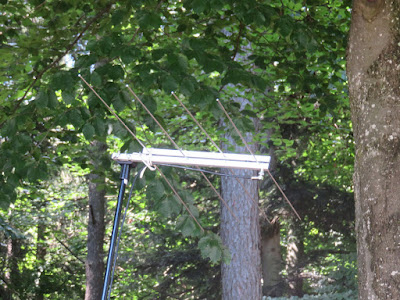 I did call CQ and tried to selfspot, but got no connection. Result : no replies ...
Then I tuned over the band, and with a lot of trouble I found one station that I could work : OK1KNG, a club station some 400 km away. OK, at least I knew my equipment worked.
SSB didn't result in any more QSO's, so I turned to FM, but left the antenna horizontal.

This got me 7 more contacts, one with OE, and the rest all with stations which were visiting the Ham Radio. Three of them were not at the fair but also activating a summit near FH.

I spent over two hours to get these 8 contacts, so my conclusion : VHF is not worth the trouble of hauling a heavier backpack and antenna up to the summit. Had I done some HF, I would have had more QSO's, or the same amount in a much shorter time. And the FM contacts would probably also have been possible with a simple 5W handheld.

Anyway, mission accomplished ... and after a little snack, I tried to find my second summit. 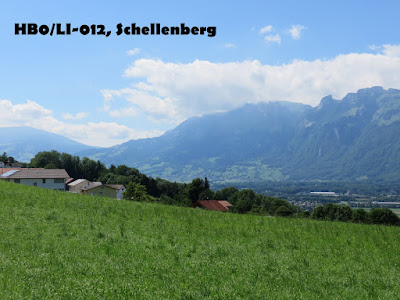 I trusted my GPS and it sent me to a road to cross the Lichtenstein border. I must have missed a sign somewhere, it seemed this road was blocked at the border ... so had to return the whole way, and try another approach. So with some delay, I arrived at my parking spot at 47.242031, 9.562320.
From there it's a nice walk to the summit, although parts of the path are difficult because of all the roots from the trees sticking out. Better wear good walking shoes ! 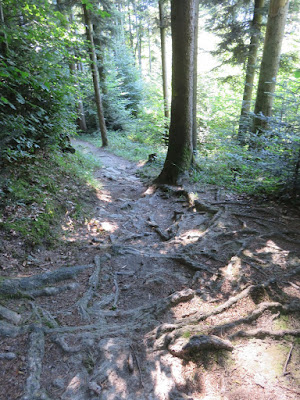 Now stupid me had forgotten some small detail, quite essential for a SOTA activation ... the battery !
I had put it out of the VHF backpack to put it in the KX3 backpack, but with all the delay I forgot that last step ...
I was lucky to have put back the internal AA-cells in my KX3 after my Mallorca trip.
I took them out for EA6 to save some weight.
So running at QRP power, and being able to self-spot this time,  I was able to make 18 QSO's in 45 minutes. Some in SSB, but most in CW, and I even made a record number of S2S contacts : 7 in total !

After this, it was time to return to my BnB in Deggenhausertal, but that was no easy ride.
In Bregenz, there had been some festival with old tractors etc ... so I ended up in an enormous traffic jam and lost a lot of time. Well, it gave me time to make some more nice pictures ... like this oldtimer I followed for at least half an hour ... 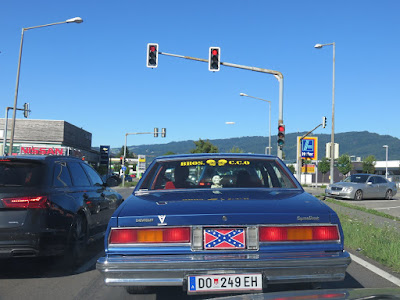 So with another dose of delay I finally got "home" ... tired but satisfied as they say .. with two new associations on my list.