After three nice days in and around Friedrichshafen, it was time to go back home, but again, I had split the trip in three days. This first day of the return trip was devoted to all DM/BW summits. 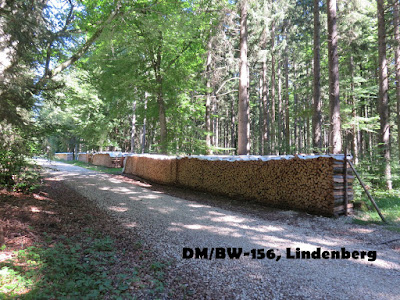 Returning to my car, I saw another car had parked, and someone was unpacking some stuff, clearly also a ham. It turned out to be Petr, OK1CZ. He had tried to work me from his car, from outside the AZ, but had a problem with the tuner in his KX2. By the time he could transmit, I must have gone QRT ... sorry Petr, more luck next time !

Anyway , we had a nice talk, after which Petr was going to activate this summit, and I drove off to my next one ... But wait, suddenly I heard someone shouting ??
In all my haste, I had left open the back door of my car ... and Petr shouted to warn me ... tnx Petr !
I owe you one in FH next year ! 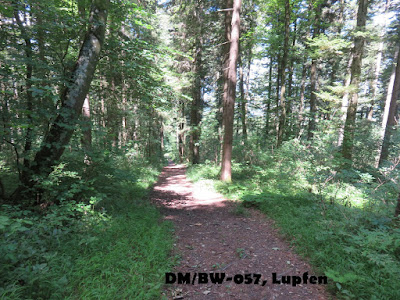 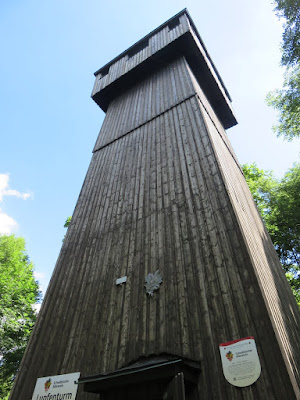 The summit is wooded, so not much to see, unless you climb the tower. But a man must have his priorities right, so I decided to EAT first, then ACTIVATE, hi. Since the weather was nice, I set up my station outside the tower, using the bench as my operating desk. 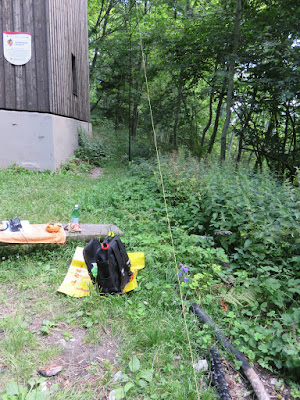 The activation went well, I made 20 QSO's on 20m and 40m, and had a good mix of SSB and CW.
After the activation I climbed the tower. The viewing platform on the tower has all windows closed with plexi sheets, so no possibility to throw out a wire antenna ... another good reason to setup your station at the base, at least if you're activating on HF. For VHF there will be some better signal from up the tower I guess.

Now, returning to my car, who did I meet ? Again it was Petr, OK1CZ !
He must have had a bad day, because again, he just missed the opportunity to work me on this summit, I was QRT before he got to the parking spot.
Well, he should have stayed on his first summit a bit longer, we could have made a S2S contact ... hi. Maybe next year we can match our schedules a bit better ?
I'm happy  to see that at least he was able to succesfully activate DM/BW-156 and DM/BW-057.
I also advised him to go to DM/BW-193, as this is an easy drive-up, with lots of antenna space.
And as we will see later (see "Day 8"), I finally was able to work him on this summit ... so it isn't all bad luck after all ! 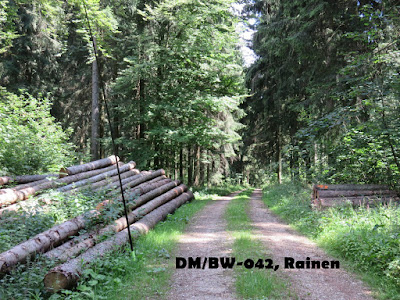 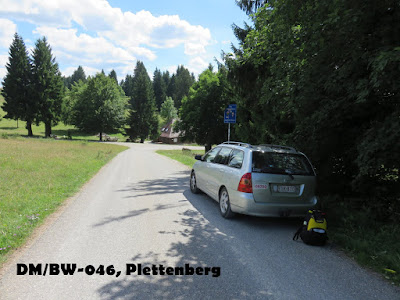 Close to the car, and up the slope was a nice bench .... well, it must have been nice when it was new, because it had some large holes in it ! 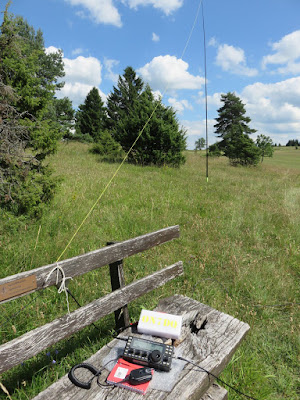 I had no connection on my phone, so only did operate CW and was lucky to get one spot from RBN.
Still I could only make 7 QSO's before a man came waving that I had to go before they closed the gate ... so far for a short activation ! 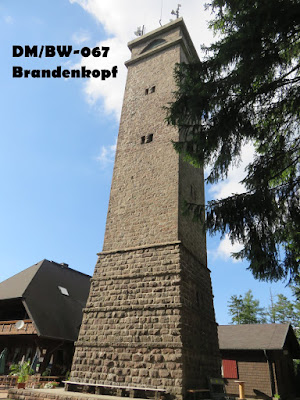 It was getting late, I still had to drive to Strassbourg after my final activation. Luckily, Brandenkopf is also a drive-up summit, I parked my car at 48.338569, 8.153926.
The road I had to drive was long and partly it was a gravel road (coming from DM/BW-046). The way down, in the direction of Strassbourg, was all paved roads, so that went somewhat easier.
At the summit is a cafetaria, a large stone tower, but also an impressive transmitting tower. 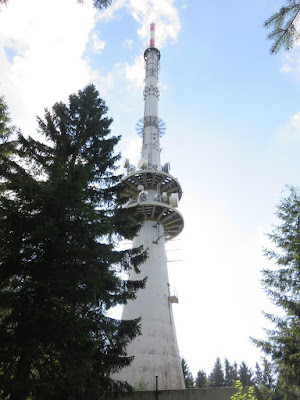 I chose an operating spot a few steps in the wood, and made this also a short activation, as I was getting behind on my schedule a lot now. Only 5 QSO's here, and then I had to pack up and find my B&B in Plobsheim near Strassbourg.