I started my trip to Friedrichshafen from my home in Ostend at 5:30 on July 11th.
Being the Flemish national holiday, I didn't expect much traffic on the highway to brussels.
Indeed, that part went very well, but south of Brussels there was an accident with a truck, so I had to make a detour, which led to large delay to start my activations.

After a short stop for breakfast, my road continued into Luxembourg for my first activation.
Now to counter eventual delays , I had made up a "plan B", and because of that accident , I already had to use it ! 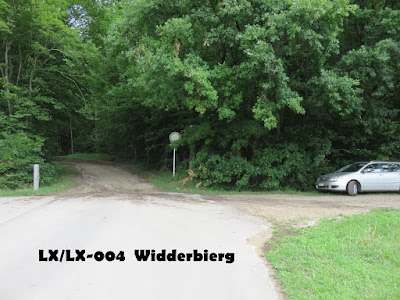 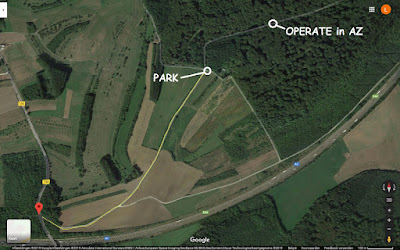 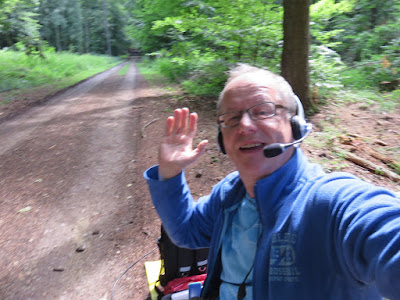 The track is not overgrown like the other places on this summit, and maybe the fact that I got a tick bite there last time, made me look for another way of access, hi.
I made 17 QSO's in CW and SSB, most on 40m. 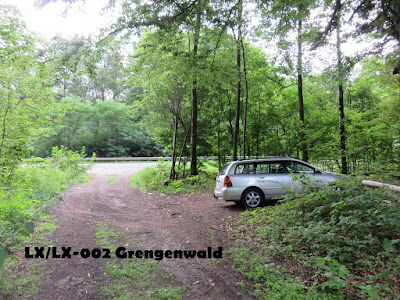 The second summit was not so far from the first, and again I tried an alternative access.
I think it is also a little easier than the one described by Phil, G4OBK.
I parked my car a bit further East, at this position : 49.670951, 6.206298
Then I walked around the gate, and followed the forest track up to this position 49.6742, 6.2054, which is in the AZ. The summit is a long flat ridge, so you have many operating spots to choose from.
If you continue walking, you will find a nice picknick bench to use as an operating table, I used that one in a later visit, see this report. I found a nice spot beside the track, near above information sign.
I had even brought my sandwhiches for lunch. After eating my lunch I set up for SOTA ... but the fun didn't last long. After only 10 QSO's I had to pack all my stuff because it started raining ... and it didn't stop raining for the rest of the day !
So, sorry, also no pictures of the activation ... too bad.

So I finally canceled my third summit, which would have been FL/VO-057, Côte de Drince, near the city of Amnéville, where I had booked a room for one night.
It was also getting too late for that one, since I did some shopping, and had enormous traffic jams around the city of Luxembourg.

I stayed in a nice apartment in Amnéville with a lovely terrace, but couldn't enjoy it much, because ... well, you know ... IT RAINED !