This was my second day at the Ham Radio, but I was also looking forward to the SOTA meetings, the group activation of Gehrenberg DM/BW-348, and the SOTA dinner.
So prepare yourself, this is going to be a long post ...

What ?
I had seen the alert from Ricardo, EA6AIF, that he was going to activate another new summit on Mallorca : EA6/MA-079, Morral.
Now how could I work him, while I was on the Ham Radio ??
When I arrived at the parking in FH, I checked the spots and saw Ricardo was on 40m CW. Yes, this could work !
So I quickly fixed my 10m GFK mast to the wooden railing between the rows of cars, fixed my endfed to it, and wound the 4m counterpoise around the railing. 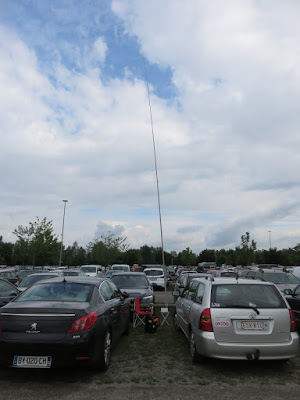 There was a huge pile-up of mainly Spanish stations, but luckily, Ricardo was working split.
After several calls, I finally worked him, I gave him a 579, and I got a 599 back. Nice !
All with 15W from the KX3 and a non-resonant endfed with homebrew 9:1 UNUN.
The key was my homebrew paddle with the "floppy disk" switches ... who needs a Begali ? 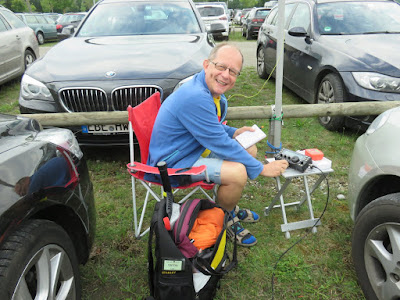 Of course, my operations attracted a couple of viewers ... hams are a curious breed , hi.
One of those was Dimitris, SV1OZ and his company. He made a short video of my operation, you can find it here : https://youtu.be/35MMiWg6NDE
As you can see in the video ... once a teacher, always a teacher ... even when retired , hi. 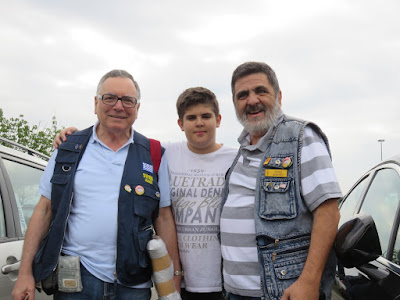 If you are interested in the activations of Ricardo, he always makes nice pictures and some videos too. For this activation, you can see them here :
http://www.radioclubhenares.org/dvge/ver-dvge/?vg=VGIB-152&qrz=EA6AIF


The Ham Radio and The Maker Faire 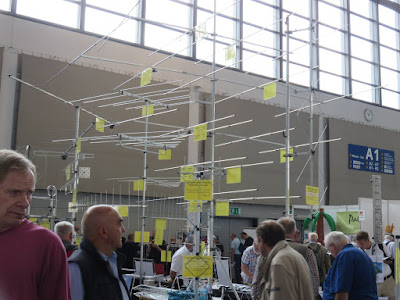 I didn't spend much time at the fleamarket since I had seen most of it the previous day. In Halle A, I bought some more accessories and antenna wire, which I may need for future projects.

On saturday and sunday, one can also visit the Maker Faire with the same ticket, so I went to see what was new there. Since I retired as a teacher, I'm still active as a tutor in the "Techniekacademie" in Belgium ( see http://www.techniekacademie.be/ , it's only in Dutch, sorry). This is a kids club on wednesday afternoon, where we let kids of ages 10 and 11 build some fun projects. It involves all techniques like wood, metal, plastics, chemistry, ... but also electricity, electronics and even programming a robot (using the LEGO Mindstorms system).
So of course, I was interested to see  what was offered in Germany.

At the Maker Faire, the DARC (https://www.darc.de/home/)  and Aatis (https://www.aatis.de/content/) had setup a large booth, where children could see all the fun projects they have to offer. One of the ever popular things to do is to learn some Morse code ... 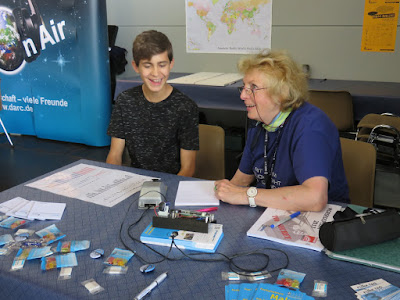 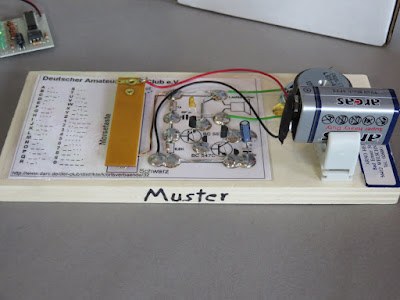 Another fun project is the so-called "line follower" robot. This can be a complex thing with a lot of sensors , an Arduino or Raspberry Pi, etc ... but it can be as simple as two small DC-motors and one sensor, like the ones in the picture bellow, as shown here by the Hochschule Ravensburg-Weingarten ( http://korsel.hs-weingarten.de/ ).
I was lucky they had some kits for sale for 1 Euro, containing the PC board (having a small fault, one ground track was missing, easily repaired) and the few components needed. I still have to find two small motors though, to complete my "robot". 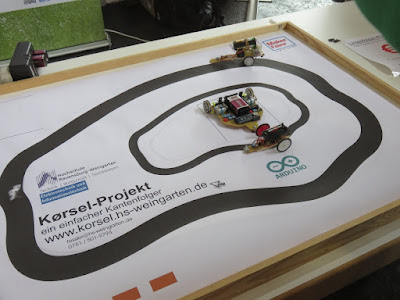 A second part of the hall was reserved for the Modding Masters.
People with this hobby build their PCs in all kinds of crazy modified cases , so they call themselves Case Modders. Being a Dr Who fan, I liked this Dalek  a lot : 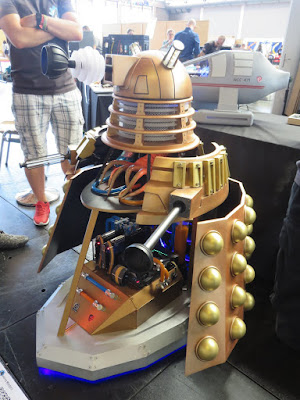 There is even a nice video about its makers here : https://www.youtube.com/watch?v=zPQhpK2ysn8

Last part of the hall was the Fantasy Area , or area for Cosplay , short for Costume Play. Mostly young folk there, dressed up as their favoutite characters from computer games, movies or comic books. Not so technical at first sight, apart from all the needlework and painting, but they also make some accessories with a 3D-printer. And beware, if you see a nice girl, it might be a boy (or vice versa) ... hi. 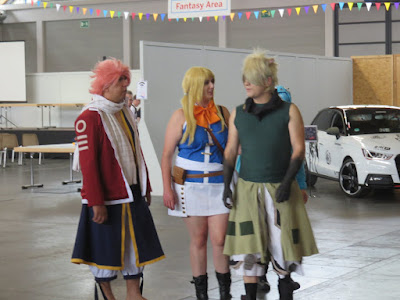 Also some nice strange objects with or without any useful purpose, I especially liked this clock : 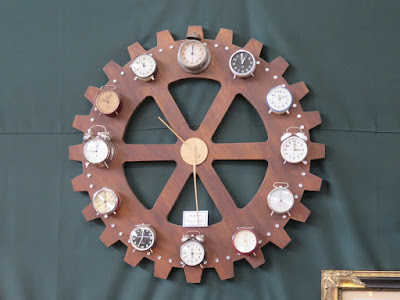 Then I visited the booth of the Elektronik Museum of Tettnang. They had a nice old telephone in my favourite colour ;-) 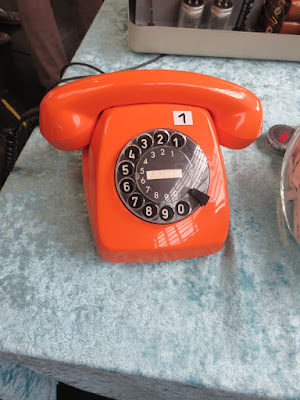 This museum is only 10km from FH, so maybe I should visit them next year, and who knows they are interested in some of my old junk ... I'll put some in my car.

Finally, I met some Americans on the Maker Faire. They were Steve, K8UD and his the TV crew from DARA, the Dayton Amateur Radio Association ( http://www.w8bi.org/ ). 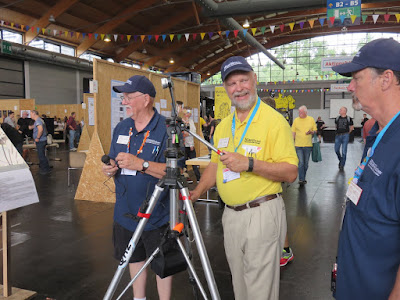 Each year, they provide a live video stream from the Dayton Hamvention, but also from the Ham Radio in FH. So their motto could be :
If you can't make it to the fair,
Watch it all from your lazy chair !
They were so friendly to let me wave before the camera to say hi to all the SOTA friends in the USA.
I haven't found the video where I am talking, maybe they just deleted it, but some of the footage can still be viewed here http://www.ustream.tv/recorded/105816485 . There are many hours of video to watch, if you find me antwhere, let me know !

The whole afternoon and evening where devoted to SOTA, nothing but SOTA ... 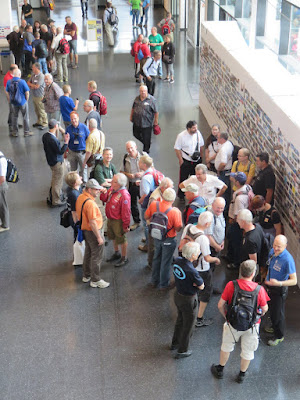 First we had the meeting at the QSL wall at noon. Amongst many other interesting talks, I had the pleasure of talking to Rob, DM1CM.
He's the programmer that makes the SOTA Mapping Project possible (https://www.sotamaps.org/).
I bothered him many times during the previous year with feature requests, errors, etc ... so I'm sure Rob was very glad to see me ;-)

One of the famous SOTA couples I met are Sylvia OE5YYN and Peter OE5AUL. I suspect they don't have a home, but live in the mountains somewhere ... you can hear them activate almost every day, hi. 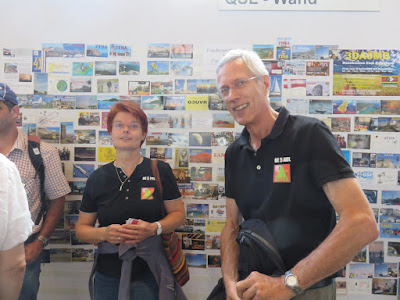 At 14:00 we had the big meeting organized by Jürg, HB9BIN, in the Austria meeting room. I saw many familiar faces, and Jürg had organized 5 different lectures, but as it always goes, time was too short, at the end we nearly got kicked out of the meeting room, hi. 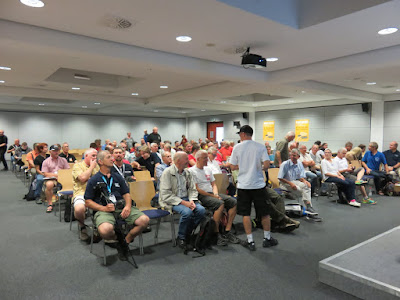 These were the subjects :
- The latest developments of the KX2, KX3 and related products by Eric WA6HHQ, CEO of Elecraft
- Using the RBN for SOTA by Hans-Peter HB9BXE
- From paper logging to tablet logging: VK3ZPF “VK port-a-log” Android app by Manuel HB9DQM
-Log4OM: Free logging software with full SOTA support by Daniele IW3HMH
- "Extreme SOTA" by Emil DL8JJ
For those interested, the presentations can be downloaded here :
https://hb9sota.ch/hb9sota-hamradio/

After the meeting there was some time until the SOTA Dinner, so a number of activators took off for the Gehrenberg, to have a "group" activation. It was not really a group activity as I thought it would be (all activators in one spot, using one transmitter and each make 4 QSO's ...), but more a "multi multi" operation. Activators came and went in succession. 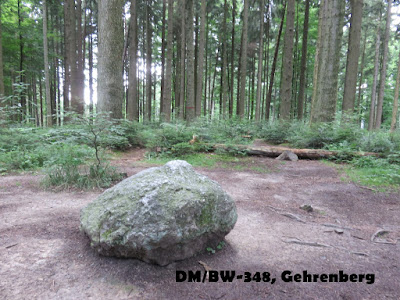 When I reached the summit, two German hams (forgot their calls, sorry) just ended their activation. And when I had just finished, DL8DZL and a friend came to my spot.
I made a short QSO with DD5LP and HB9BIN who were elsewhere on the summit. Of course this was not valid for SOTA, but still fun to say hi to someone you can hear but not see ... the AZ on that summit is quite large.
Elsewhere there were activators from VK, OK, and maybe more. 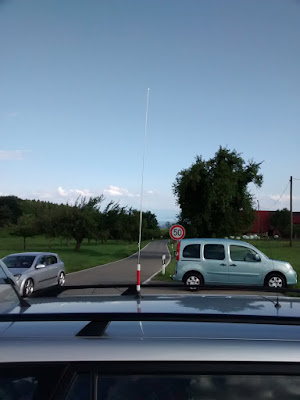 When I drove outside the activation zone, I parked my car along the road, and quickly mounted a homebrew short vertical on a magnetic mount on my car.
It's just a base loaded telescopic whip, tuned for 30m, but the KX3 can tune it up on 40m and 20m too.
In only a few minutes, I worked 4 of the other activators with the KX3 in my hand, using only the internal AA-cells (output 5W).

This dinner was organized by Ed, DD5LP, and 21 people showed up, so we had a nice group of activators from many nationalities. 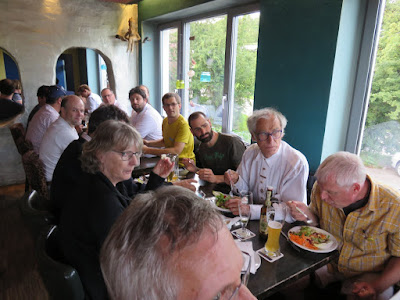 Two members of my local club in Ostende already had a WSPRLite, and I had seen a demo of how it worked ... and that it DID work !
So , of course that started me thinking.To make sure I had a chance, not only did I make a special SOTA HAT, but also had custom printed a T-shirt, and to top it all off, I started tinkering with an Arduino and a display to make an "electronic ornament" ... and that should be enough to win the prize ... I thought. 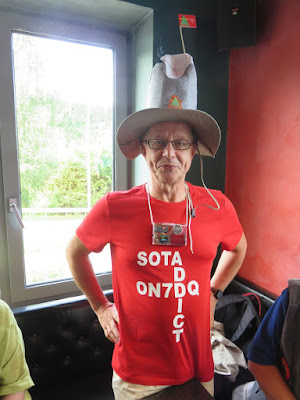 [More details : the basic hat is from the Decathlon Trekking department, on top of that I constructed a "mountain" from a piece of grey felt, then made some "snow cap" from an old bedsheet. A small soldier from the toy box just looked like the climber on the SOTA logo, so I glued that on the side, and marked the summit with a printed flag on a skewer stick. On the front I also glued the SOTA logo. The T-shirt was printed at Decathlon. And this is the Arduino contraption : 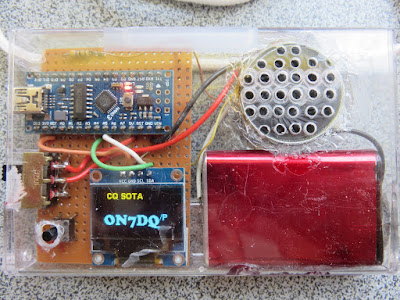 It displays three different messages on the display, and when the button is pressed, it plays CQ SOTA DE ON7DQ/P in CW from the little speaker. On the back of the speaker is a small Li-Ion charger board to recharge the builtin Li-Ion cell (the red rectangle).]

As it turned out, I shouldn't have bothered that much ... when I entered the restaurant in my "costume" ... I was the only one there that looked SO(TA) silly ! HI
So no voting was needed to declare me the winner, hi ! 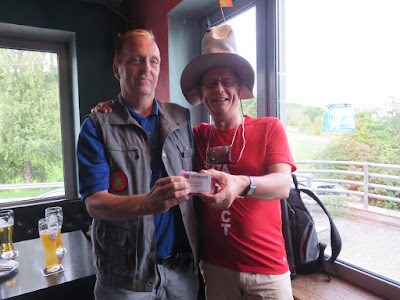