The Ham Radio, some SOTA and a dinner ... 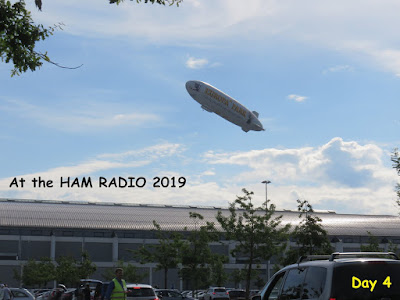 The visit to the Ham Radio fair always brings something new ... and something old (lots of "old" in the two halls of the flea market !).

Also good to be able to say hello to some special people, like Hans Summers of QRP Labs. 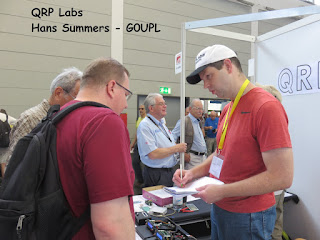 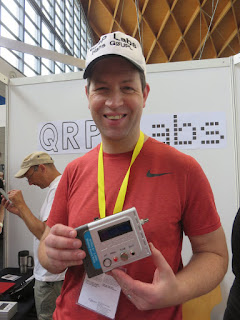 In the right picture Hans is holding my build of the 40m QCX, in a D-Link AP housing.
I showed him my 20m version last year, which he liked so much that he mentioned it in th QRP Labs newsletter. He was doing good business right from the start, we didn't get to talk for too long.
In the  backgound is Dieter from Palm Radio, who unfortunately has stopped producing the fine Palm keys and paddles.

Flea market ... look at all those hams hunting for bargains ... 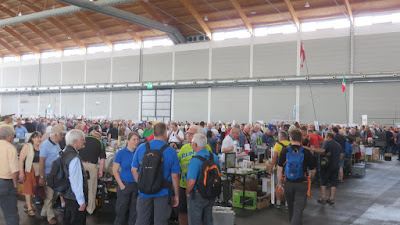 At noon, there is the traditional SOTA meeting at the QSL wall, here some familiar faces ...
(If you're interested in more pictures of the meetings, send me a mail, address is on qrz.com) 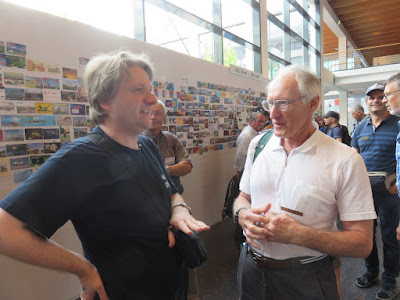 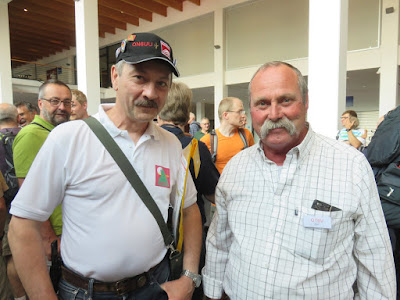 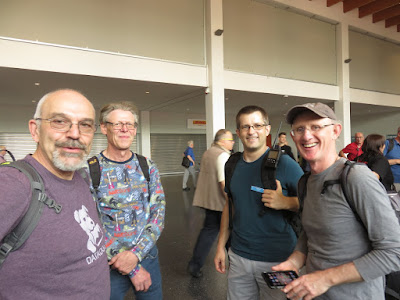 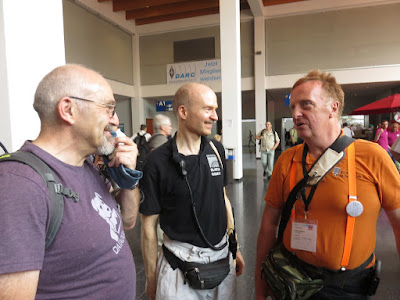 I ended my visit to the fair at 15:00 local time, to do some SOTA activations before the SOTA dinner.
First of course, the closest summit to the fair.

See summit info in a previous report here.
When I arrived, I was greeted by these three 'suspects' ... but I was lucky, they had just finished their activation.
And I was just in time to make a S2S contact with DL/HB9EIV/P on DM/BW-484, Bussen, on 2m  with their portable rig. 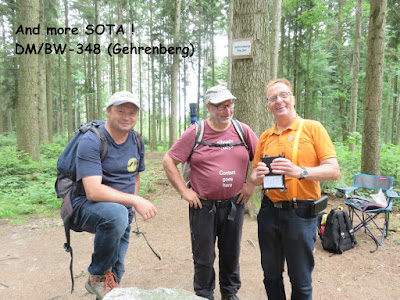 While we talked a bit, I did set up my HF station, and Ed, DD5LP was kind enough to take a nice picture of this "SOTA ADDICT" ... hi 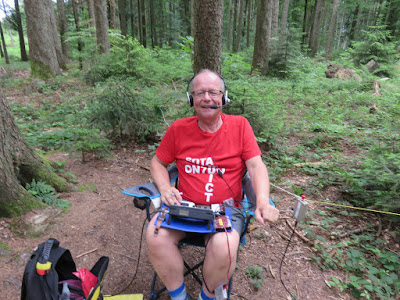 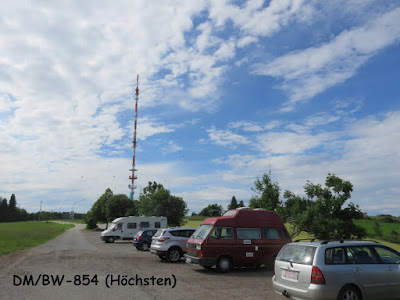 At the bandstand on the summit, my seat was already taken !
Herbert, OE9HRV was very busy making QSO's on 20m. 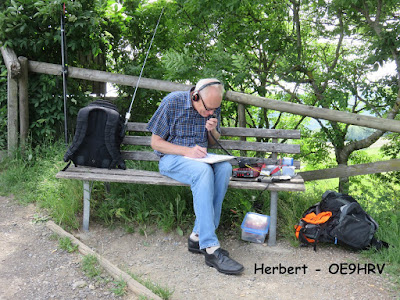 No problem, let's walk around the bandstand, and find another spot.
OH NO ! Another activator had already set up ... it was Matt, OE6FEG. 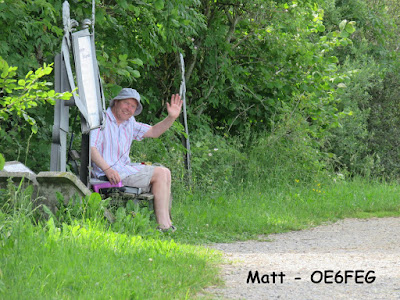 He told me he was going top do some CW on 10m, or later on 40m if 10m was closed.
Okay ... still no problem, the summit is large enough for the three of us ... and we agreed that I would do some CW on 30m, that should not interfere with the other two operations on the summit.
So I set up my station still a few benches away from Matt.

Later I got a visitor, it was Laurent, F8CZI, who also came to activate the summit.
He was kind enough to take the picture below. 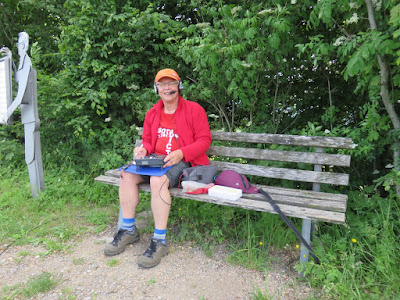 Then ... something funny happened, or rather something very embarrasing for me !

It's a proof that I’m terrible with faces …

Before my activation I met Matt, OE6FEG as described above.
One important detail : Matt was wearing a hat when I met him (see picture).

In the middle of my activation, a bald guy came up to me and said “I’m Finnish” (at least that’s what I heard, I had my headphones on, and was concentrated on the CW … and I only had looked up half and half to see who it was that spoke to me).
I said “Finnish ? I was expecting a Swedish ham”
I have to explain that I had been been in contact via DD5LP with Jaan, SM0OEK,  but we hadn’t really agreed on some joint activation …)
The bald guy replied “No , it’s me Matt … I have finished activating on 40m, so you can use 40m now if you like !”
HAHAHA … I am sooo bad with faces, so sorry Matt … but it’s all in the “hat” you see … 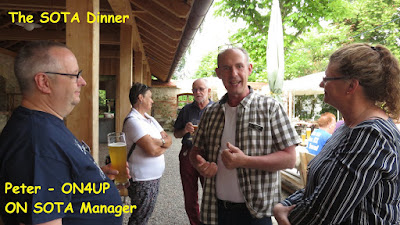 Good company, good food and lots of beer ! Perfect !
Thank you Ed, DD5LP for organizing this for the fifth time, it becomes a bigger and bigger success every year. I won't write too much about it here, there is a nice report, with many more pictures, on the SOTA Reflector here.

Enjoy some of my pictures here ...or better : be there next time ! 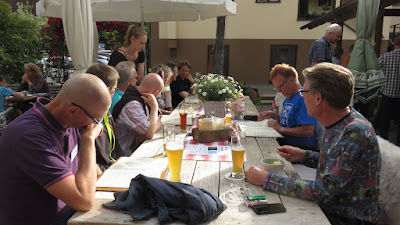 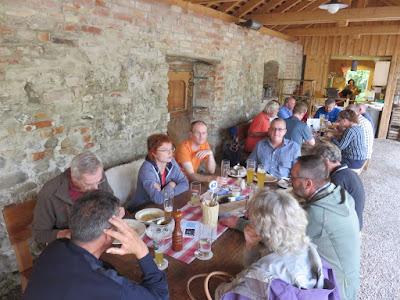 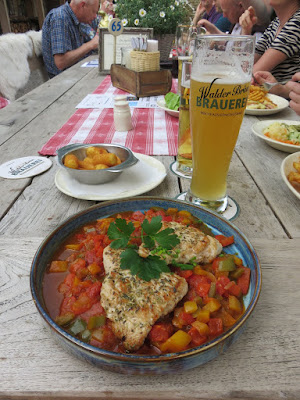 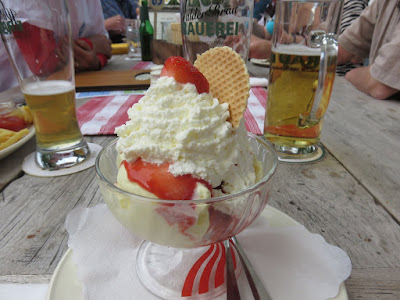 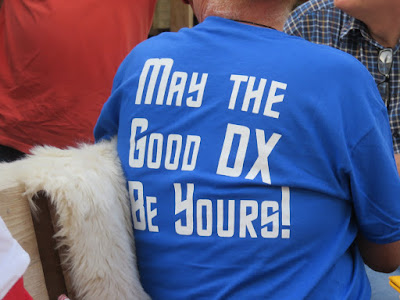 Continue reading ... go to DAY 5
or
Go back to overview HERE