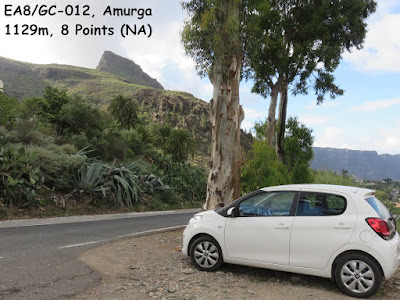 I had planned this summit as my last one for this visit to Gran Canaria.
If "old man" Geert PA7ZEE could do this at age 77 ... this youngster of only 60 years sure could do it too ? Boy, was I wrong ! Read on ...

I found a nice parking spot North of the village of Fataga, at position 27.891172, -15.563388
(You can easily see it on Google Maps in satellite view and in StreetView, it's just at the entrance to a retreat called EcoTara.
NOTE : the parking spot advised by PA7ZEE at 27.890332, -15.562975 is no longer useable, there is a NO PARKING sign now. But it is the position where you start walking to the track.
You could drive up to the water reservoir, but maybe it would offend the locals.
See picture below, explaining the situation (click on the picture for enlarged view). 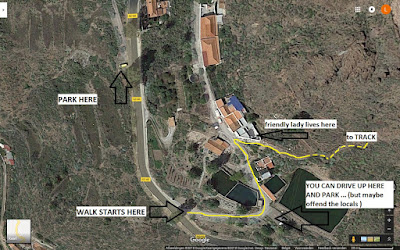 At the start, I was still full of courage ... as you can see in the picture.
At the white house (see map above) , I briefly spoke (in Spanish) to a friendly old lady that was hanging the laundry in front of her house.
She told me that not many people walked the track to the summit, she must have thought I was another crazy tourist ... 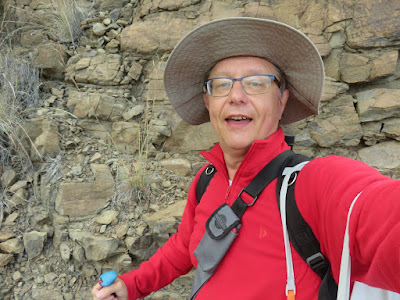 This sign will be about the only clue you will get as to where the track to the summit is, apart from some 'stone men', that are not always easy to spot.
So I tried to follow the track from OpenStreetMaps, which I also had on my phone in the app MAPS.ME. I also had the written instructions of Geert, PA7ZEE, so what could go wrong you would think ? 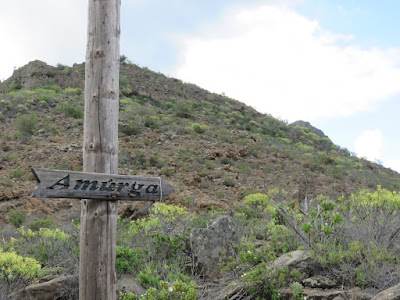 Well, I still managed to miss the track somewhere, at a point where you have to climb over a pile of rocks to get on the ridge, and found myself much lower on the slope.
This is the track of the first part of my ascent (click the picture to have a better view).
The point where I realised I was way too low connects to a track that may be a bit shorter to get to the ridge. 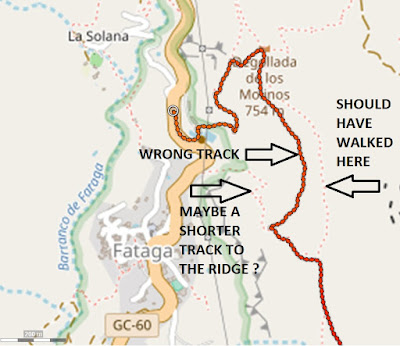 With some trouble, I did get "back on track" ... but lost some time in doing that.
I continued as good as I could, but this track has many dangerous places, where you have to go around a lump of rock, and where the path is very narrow, and having loose gravel ... so in one word : DANGEROUS. I had read somewhere that this is not for people with vertigo, and I can confirm that ! 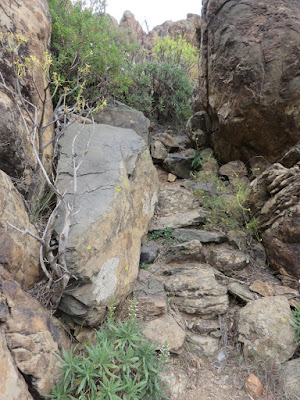 Finallly I found the "caves" that were mentioned by PA7ZEE, so I knew that I was right ... but I had already walked two hours by then, and was getting tired .... 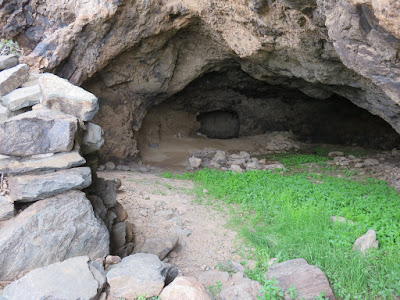 I continued walking for another hour, passing points like on the next picture. There is hardly any firm or flat ground to step on, still you have to get around that "lump of rock" ... I took the picture looking backwards, in case I forgot how I got there ... pointing with my finger where I kind of ... "walked" ... hmmm. 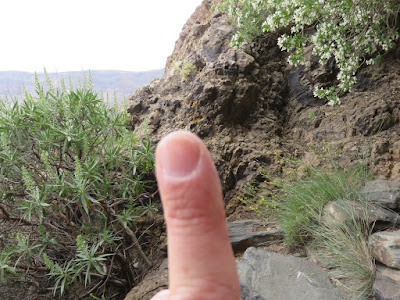 After three hours, three things made me decide to give up.
Bad weather was coming in, I was getting exhausted, and I couldn't determine how far I really was from the summit.
Not only do I carry a fine HF transceiver, but also some (small) dose of wisdom ... which told me it was not worth risking my life for this summit, and I returned.

This is my track to the point where I gave up. I was probably not too far from the summit, if I have its location correct, but I couldn't be sure at the time. 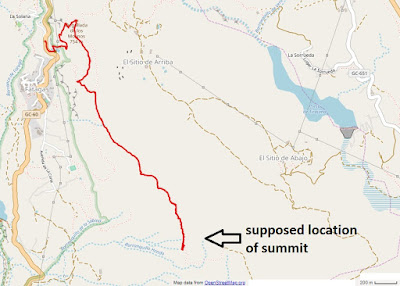 Making no errors in the descent, and also finding the rock climb spot, I was back at my car in just under two hours.

And now for the strange title at the start of this post.
After this trip, I made a 10 day trip to Friedrichshafen, to visit the Hamradio fair, but also to meet a lot of SOTA friends (see another post on this blog).

At the SOTA conference, one subject was presented by PA7ZEE (hey, I knew that call !).
The title of his speech was "An accident waiting to happen" ... what could that mean ?
As it turned out, and to my surprise, one of the examples for a failed activation was about Vic, GI4ONL, who got in trouble on this very summit in March 2017. He had fallen and had to be rescued off the summit by helicopter.

If Geert would have told me this story before my trip, I think I would never have considered this summit. So I was lucky to have aborted the activation in time, and to get back safe and sound !

For my last day on Gran Canaria, I had to re-pack my stuff for the flight home, therefore I didn't have all my SOTA gear in the backpack (like fishing pole and "dangerous" metal parts ...).

And with my Amurga adventure in mind, you will understand that I didn't feel for any more SOTA either ... hi.

So I spent my last day driving up the "Barranco de Guayadeque", which is a beautiful valley near Ingenio. I drove the GC-103 all the way to the Restaurante Vega, which is built inside a cave. 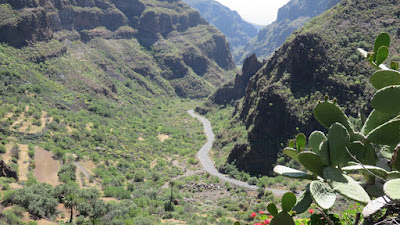 This was the last report on my 2018 trip to EA8 Gran Canaria, thanks for reading !

See you on one of my next adventures ... 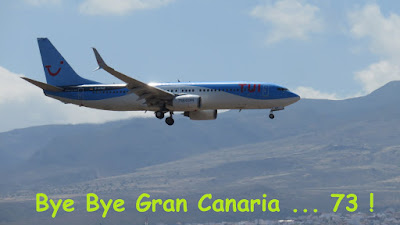 Go to my next SOTA adventure