I found this interesting powermeter on AliExpress.
I can't give a link because the store may change or disappear, but do a search on

and you will find it for around 15€ .. including free shipping,  a real bargain ! 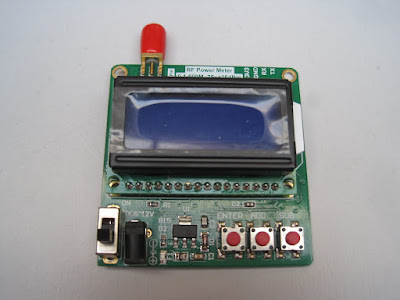 There is not much to "build", this is not a kit but a ready-built pcb, based on an Analog Devices AD8307 logarithmic detector.
I'm pretty sure it is a clone of some known design, but could not find any more info on the internet.
Also there is no manual, but the use is very straightforward.
Just power it and it will measure ...
The external attenuation can be entered in the meter via the menu buttons, so that your reading is your actual power.

All you have to do is find a case for it.
I took a small mint tin, found two flat Li-Ion cells (from cordless telephones), a small fuse, and put it all toghether as you can see in the pictures below.

The only hole I had to make was for the SMA connector. 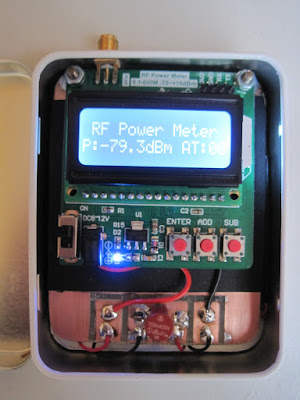 The batteries are charged with an external charger, one could of course make a simple LM317 regulator that puts a fixed 8.4V on the cells, but don't forget to put a current limiting resistor or you will blow the fuse ! ;-)

I have used a circuit like this one before with good results.
It is not a balanced charger, but with cheap cells from the junkbox I don't care too much ... from time to time I may charge cells individually with a "one cell" charger board. 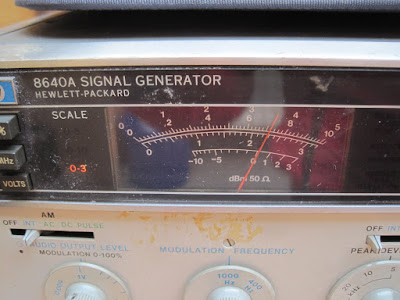 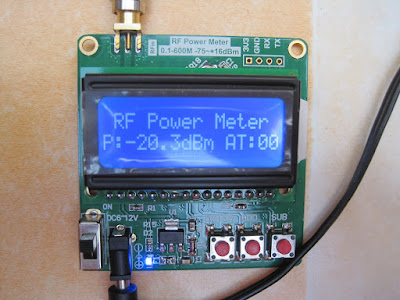 That's very good considering the low price of this board, and the small error can be contributed to the cable loss, or even the HP generator, which hasn't been calibrated for a long time.

Also the meter is very consistent over the whole dynamic range, down to -70 dBm, the error was never more than +/- 1dB (and supposing the attenuator in the HP generator is still accurate). 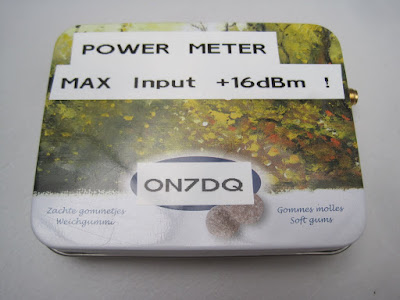 Conclusion : a very nice addition to my shack !