Part of my trip to the USA in April 2015 was attending the QRP Conference in Branson, Missouri, called OzarkCon. I found out about this event by mailing Bill, W4RK for some information on SOTA summits in Missouri (see my report elsewhere on this blog). Bill is the SOTA Manager for Missouri.

The conference always starts on a Friday evening, and ends with a breakfast on Sunday morning. The full program is here : http://www.ozarkcon.com/index.php
And here you can see who else attended : http://www.ozarkcon.com/AttendeeList.php
I had no doubt that  I arrived at the right place on Friday … the parking lot was full of antennas, well … most antennas had a car beneath them, hi. 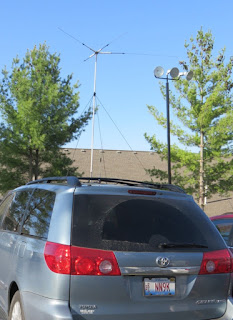 After reporting to the front desk I got my badge, and could enter the dining room. 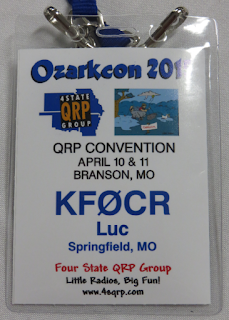 First we had the “Dinner Banquet”, with a typical American dish :
Beef stew, macaroni and cheese, vegetables and a salas on the side ..
Ice tea for drink and a piece of chocolate pie and coffee for dessert … 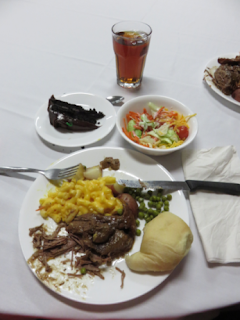 At my table I was in the good company of Gary W0MNA and Martha W0ERI (see my USA SOTA story), and their granddaughter Casey, amongst others. 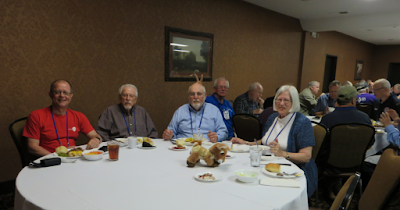 Other famous people joined us later, like Phil Anderson, W0XI and his xyl.
I had no idea who he was, but as I found out, he was the founder and owner of world famous Kantronics for over 40 years.
(see a short bio here  : http://www.ozarkcon.com/w0xi/w0xi_2012.htm) .
Also in Europe they are well known for all those packet and multimode  radiomodems  like the KPC3+ or the KAM. Phil sold the company after his retirement, but now runs a webstore specializing in everything “crystal radio” and ultrasound stuff : https://www.midnightscience.net/

As you can guess from the pictures, most attendees are “of respected age” … to say the least.
Sorry to see that also here QRP and CW does not appeal to the younger generation …

Still on Friday night was the Kit Building Session, this years’ kit was a very easy to build 40m  low pass filter. I did not register for this, since the room in my suitcase was very limited.

Other activities were the permanent flea market and QRP projects exhibiton and contest.

Also fun : if you could work the local CW station K0N using only a dummy load , you got their special QSL card. Of course I took the challenge, I set up my KX3 with a dummy antenna in the hallway, and worked K0N in the next room with 599. One minute later I exchanged QSL cards with the operator !

Saturday was a day full of activities … starting off with breakfast, followed by a whole series of presentations to everyones taste … some were interesting, some were rather boring (at least for me).

Between presentations I met some more ham radio “legends” …

I had a long chat with Joe Eisenberg, K0NEB, who gave a presentation himself, on his trip to Friedrichshafen in 2014 (see http://www.ozarkcon.com/k0neb/k0neb.htm) .
He is the Kit Building Editor for CQ Magazine, and makes some very amusing videos on his own YouTube channel about the Dayton Hamvention (biggest hamfest in the world !)
See https://www.youtube.com/k0neb .

Top of the bill was my meeting Steve the “goat man”, WG0AT.
I had seen Steve in the audience, but had not had a chance to speak to him yet.
Now, there was a lunch break of one and a half hours , and the sun was shining, so I decided to do some ham radio .. I was at a radio conference after all, wasn’t I ?
So I put the KX3 in the trunk of my car, and connected an endfed halfwave for 20/10m and fixed the far end to a tree, height above ground was not more than 2m (6ft).
Still I managed to find a SOTA staion operating from Colorado on 20m.
I called them and yes ! they heard me and I made a short exchange.
And just as I said “thanks for the 59 from Colorado, 73 …” , somebody sneaked up my back , shouting “What ? Colorado ? Can I use your transceiver ? …”  and almost pulled my microphone out of my hand …
Of course it was Steve !
The operator in Colorado was one of his friends, so he was very glad to have a contact with him .. with just 10W and a very low antenna on the parking lot at OzarkCon !

After this QSO I had a nice chat with Steve, he’s a very nice and funny guy.
And of course I couldn’t let him go without tricking him into a “selfie”, hi.

So far for my personal experience at OzarkCon 2015, I liked it a lot, and though it’s no big event like Dayton or Friedrichshafen …the atmosphere is great. I may be back one of the years …

There were more activities, but I didn’t stay for the Saturday music or the Sunday breakfast … because I had other plans, and lots of driving on Sunday for 2 SOTA activations in Arkansas. (see my USA SOTA 2015 report elsewhere on this blog).