In March 2015, I went on a study trip with my students, visiting Washington, DC and New York City. While I was there anyway, this looked like an ideal opportunity to extend my stay with a family visit in Springfield, MO and my first ever SOTA activations in the USA.
As I planned everything, it turned out that I was lucky : I would be in Missouri at the time of the OzarkCon QRP Conference in Branson, MO !
(look for the OzarkCon 2015 post on my blog)

I won’t go into all the “tourist things” we did with the students, but I have to mention just this one thing … 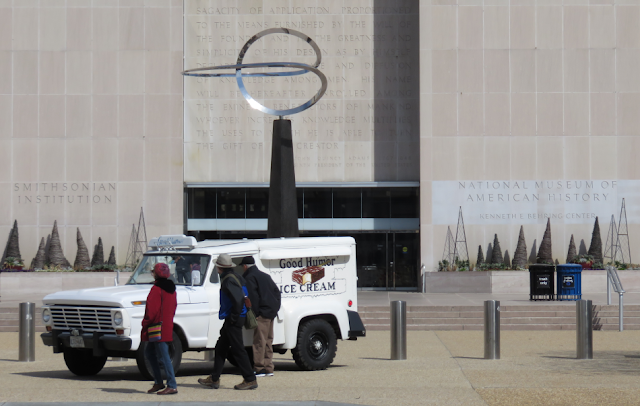 In Washington D.C. we walked by the National Museum of American History, and I thought I saw an interesting antenna … was that a dual-polarisation magnetic loop, mounted on top of an FCC DF vehicle ? … maybe I could use the idea for my next SOTA-antenna ?
Oh no, wait ! Look again … the antenna is actually a work of art … and the vehicle belongs to an ice cream vendor … and it says “Good Humor” .. yes, very funny !

Now over to my next destination : I arrived in Springfield, MO, on March 28.
Since I travel alone, I booked a small rental car, a Chevrolet Spark.
Not only was it small and cheap, I thought the “spark” was very appropriate for a ham ! (remembering how radio all began … ;-)

At the airport I was told that the Spark was not available, there was a problem with the license expiring in April … so they offered me a free upgrade to this “little” beauty : a Hyundai Sonata. It had all the luxury I could dream of : A/C, cruise control and also free  Sirius satellite radio (see http://www.siriusxm.com/ ) . Nice !

For all my radio needs, I adapted a commercial cigar lighter accesory into a dual PowerPole output, it had also a dual USB output, so I could charge my batteries, feed my rigs, my phone and my tablet.
And then it had still a conventional cigar plug left available. 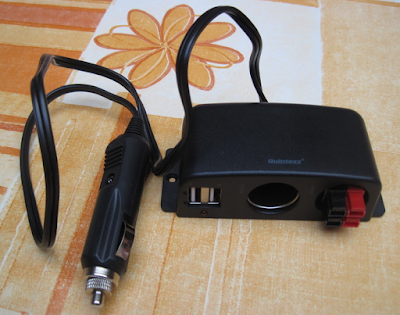 Toghether with a mini LiPo-balanced charger (a HobbyTiger BC-4S15D) that works at 9-16V DC input, I could recharge my 5800 mAh LiPo pack while driving from one summit to another.

SOTA or Summits On The Air

Ik activated 10 different summits in Missouri and Arkansas, on 6 days in April 2015, using my US callsign KF0CR :

I started SOTA in 2014 and had only 14 points so far, these 10 activations raised my score with an impressive 48 points to a total of 62. Still far from Mountain Goat but I take my time, hi.

My equipment for his trip was an Elecraft KX3, a 3-cell LiPo battery with a capacity of  5800 mAh, and a link dipole which I constructed and tested just before the trip. I also had a homebrew mini-paddle for some CW, although I am mainly a phone operator. But you never know ...

As a mast I had a 6m telescoping fishing pole, when collapsed it’s only 58cm long, so it fits easily in the side pocket on my backpack. Setting up the pole is very easy using a ground stake, consisting of a 25cm steel pin, and a plastic tubular piece which holds the pole (both items are available in the fishing department at Decathlon (sporting goods store in Europe).
No guy wires were used, except for the two ends of the dipole.

This setup resulted in a fair amounts of NA contacts, but some nice DX too: Spain, Poland, Ireland and England. Too bad I didn’t have a chance to work a Belgian station.

Most of the time I was just setting up on the ground (on a large plastic bag, using my folded fleece jacket as a cushion to make things a bit softer …).
If I was lucky, the summit had some concrete pillars left, that were used for a lookout tower, then I used one of those as a “table” (like in the picture below, on W0M/ES-001, Webster High Point).

I think it’s a bit strange that these towers were “fire towers”, but why are they all gone ? Did they burn down ? The fire watchers didn’t do a good job then ?  I’m still a bit puzzled on that subject, hi.

My first activation was on summit W0M/ES-002, with the promising name Romance Lookout. I didn’t find it very romantic though … there were ticks and other bugs … and nothing but rocks and trees, not much else to see. Getting into the activation zone also required some bushwhacking, there is no path
(there is a road to the radio tower on the summit, but that is closed).

Now for this first activation, I tricked my brother-in-law, Leo NM0U, into accompanying me.
I felt a bit safer with someone on my side that lives in the region, and knows all horrible dangers we could encounter …
Below, the two “explorers” , well protected against the sun and the bugs …


After this first activation, Leo had enough of it .. SOTA was not his cup of tea. But I had become confident enough to do the rest on my own .. seeing that the walks were not too difficult, and those dangers didn’t work out that horrible after all, hi.

On my second activation on W0M/ES-001, Webster County High Point, I got two well-known visitors: Gary,  W0MNA and Martha, W0ERI from Leavenworth,KS !
Gary sent me plenty of mails with answers to all my questions, and all sorts of interesting tips on activating in that region. So now I finally got the pleasure to meet them live ! 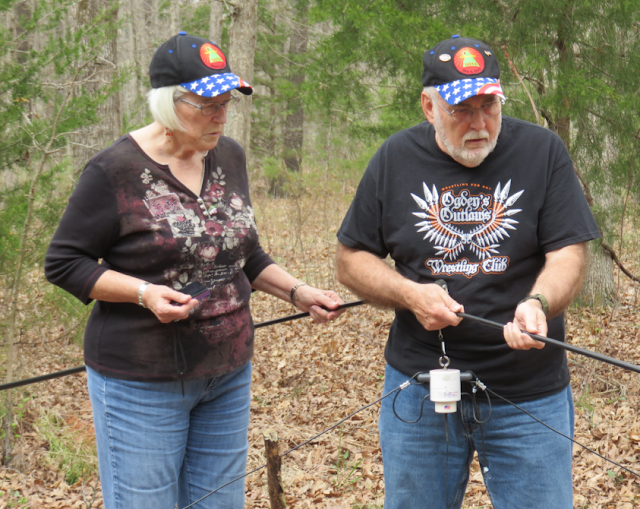 I had done my activation in the morning, and had my picknick on the summit while they where approaching.

This gave the opportunity to do a  “double duty” on the summit … Gary and Martha called me on 2m from outside the activation zone, and I did the same when I drove off, leaving them to do their activation on the summit.
We didn’t talk too long, since we were to meet again at OzarkCon the next day.
Meeting another SOTA activator is also an opportunity to “spy” a little … how do they do it ?
As it turns out, they do it very well !
Being with two people means you can carry some more or some heavier “stuff”.
Gary’s backpack is usually around 10 kg, Martha’s around 5 kg.
What’s in the packs ? … 1 transceiver , a Yaesu FT857D, 2 LiFePo A123 battery packs, each one is around 1,1 kg, an OCF-dipole (most often called a windom antenne in Europe), and of course several accessories. That antenna is a Buckmaster 4 band OCF (see http://hamcall.net/7bandocf.html) , weight another 2 kg. And then of course the usual food & drink, adding even more weight.

I watched Gary throw a rope over a tree branch to pull up the OCF antenna. He’s using a small plastic bottle, halfway filled with gravel and he seemed very good at throwing … I would need some more practice to do that ;-)

The balun in the middle (well, not actually in “the middle”, rather at one third … it’s an Off Center Fed antenna you know ;-) is quite heavy, so they lift it up with their two walking poles, which are actually fishing lure retrieval poles sold by Cabela's Outfitters. They extend to almost 5m, and the two poles form a letter ‘A’ for stability. 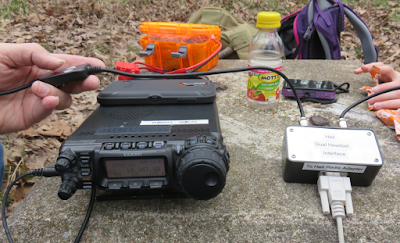 And how do you operate one transceiver with two operators ?
Simple ! Each has their own HEIL Traveler-headset, and each has a PTT button, but the microphone signals are coupled in a small box (on the right in the picture), which then feeds the transceiver. They take turns in working each chaser, and so both have a valid activation in the end. Now the most clever trick most chasers don’t know about … Gary lets Martha note all QSO’s in the log, isn’t that handy ! (it’s the same log for both after all …)
Think about it when you work them next time … hi.

I’ll skip a few summits now before this page gets too long. Most summits were quite boring after all, it was quite warm, a steep climb, and I saw more trees and bugs !

One exception : in my opinion, the most beautiful summit on this trip was Kennedy Mountain in Arkansas, W5A/BR-006.
[ added note in 2016: this summit is now closed to the public, very sad ...]

Just a couple of days earlier , this summit had been visited by a whole group of hams, including well known (or should I say legendary) Steve, WG0AT. He made a nice video of their group activation (including some images from OzarkCon). See https://www.youtube.com/watch?v=rXNcC5CkcRs .
Really excellent video !

The easiest summit on my trip must have been Whitney Mountain, also in Arkansas. It’s an easy drive-up summit. You can park next to the lodge, carry all your stuff to a large grass field next to the parking space, and enjoy SOTA !
I discovered that the lodge provides open WiFi access, so I could quickly consult the sotawatch website and found 4 other activators and their frequency, but all four were in CW. This was the only time I got out my mini paddle and worked all four S2S !
(for those interested, I posted a picture of the two mini paddles I had with me on the SOTA reflector : http://reflector.sota.org.uk/t/homebrew-micro-paddle-cw-with-paper-clips/10615/4 )

Not all summits were that easy …
Two days before going back to Belgium, I said goodbye to the family and moved to a motel in Ironton, MO for two nights, to do my last four activations.

Right across the motel, is Sheperd Hill , W0M/SF-011, so that looked easy !
Now, when taking the path to the summit, it suddenly gives you a choice …

Can you guess which path I took ?
Of course, the steep one ! I had to prove that I was "the man", hi … but I should have known better …
Steep was no lie … but with a couple of stops I managed to get to the summit after all and had a good activation. Coming back down, I wisely took the “less steep” path … one more lesson learned !

And of course .. I could not leave Missouri and NOT have been on the highest point in the state … Taum Sauk Mountain.
This is also a very easy summit. Since they get many non-ham visitors, there is a large parking lot, and it’s only a short walk to the actual summit. 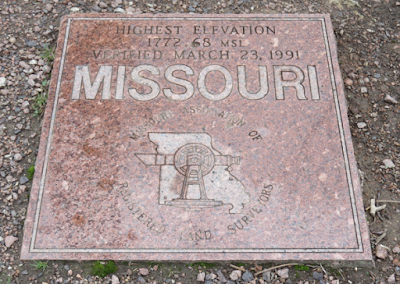 Next to the trig point marker is a “rock”  of unknown height, but of course I had to have a picture of myself on this “higher than the highest point”, hi. 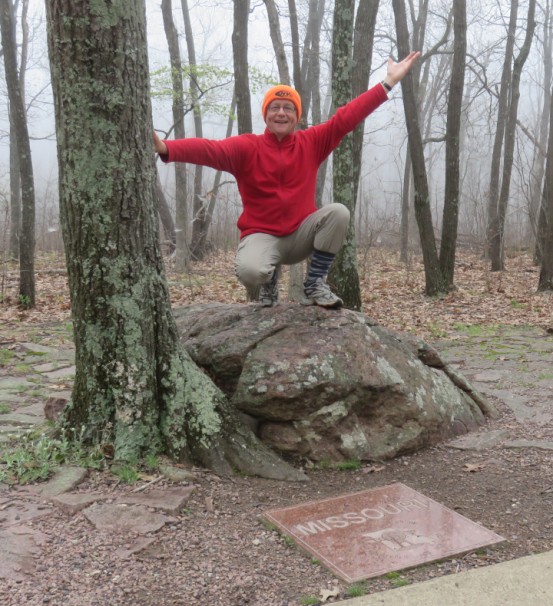 And with that achievement my SOTA tour 2015 in the USA was over .. I took the plane for Belgium in St. Louis … bye Missouri ... back to Ostend, Belgium.

I hope to be back soon … for more SOTA fun !