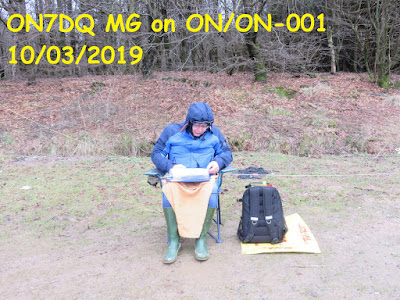 Surely I could get to 1000 points during my traditional SOTA Winter Tour, where the extra bonus points quickly add up.

Now crossing 1000 points would not be too difficult, but I wanted to land on EXACTLY 1000 points.
As I prepare all my trips in a spreadsheet, it was not too difficult to make a schedule that would get me to MG on the highest  summit in Belgium, ON/ON-001, Signal de Botrange.

I decided to do three summts on March 8, and the remaining 3 on Sunday March 10.

I had  booked the same AirBnb place as last year, near Aachen in Germany, because I also wanted to do some shopping and visit the city. Now what could go wrong ?

On March 8, I  left my QTH in Ostend at 05:45 local time. Traffic went really smooth this time, the roads were a little wet and I had some light drizzle ... no problems so far.

But when I came to within 10 km of my first summit ... it started snowing !
First a little snow .. then  more ... then more ... then even more !
Driving became rather dangerous, and by the time I arrived at the parking lot for ON/ON-010 .. it had turned into a nice "winter wonderland" ... 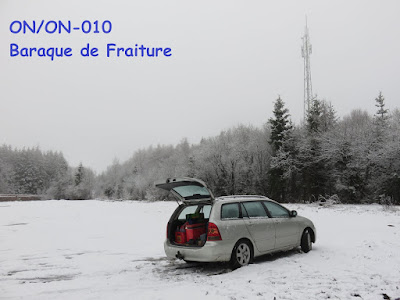 I could have used one of those small pop-up tents as suggested in this Reflector thread http://reflector.sota.org.uk/t/thoughts-on-pop-up-tents/18804
[NOTE : in the mean time I have bought the one as suggested by Peter, ON4UP]

This time though, all I had was some umbrellas .. so I improvised a "two-umbrella-and-a-chair" winter shack. 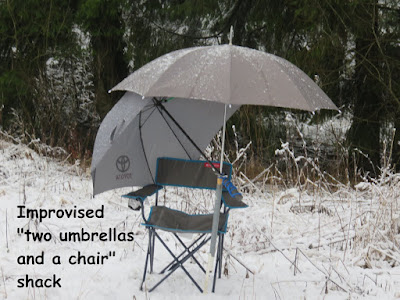 By the time I had it all set up in the snow ... it stopped snowing as abruptly as it had started !
Anyway, I had a nice cold but dry activation, hi. 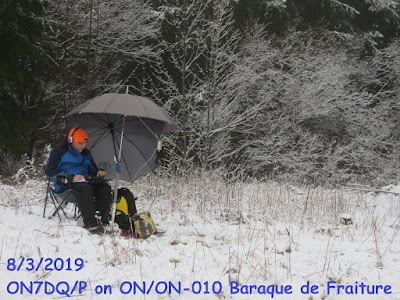 Only problem, the chasers must still have been asleep, and so did the propagation .. I could only attract 7 callers. To think that I once had 100 QSO's in just one hour on this summit.

My last caller was G4OBK. I had been calling CQ in SSB, but Phil called me in CW.
A nice feature of the KX3 is that you can instantly reply to a CW call without switching to CW mode. Just grab the paddle and go ... the TX frequency and sidetone etc, are all taken care of.
After the CW qso you can just contine in SSB as before without touching one button ... nice !
(only one thing : the filter bandwidth will remain SSB-wide ... but not a problem with Phils' signal) 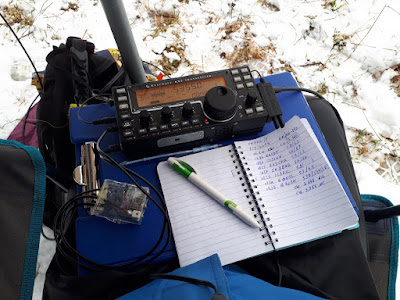 So after that, I packed up and went to the next one.

There was also some snow on this summit, but at least it had stopped snowing, and I could set up without the use of any umbrellas. It was still cold though, around freezing point. 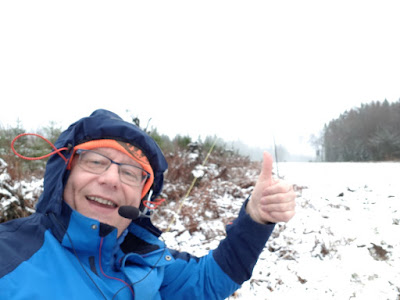 The chasers were there and the propagation too .. 22 qso's in the log, and a nice S2S with Jan, OK2PDT.

After which it was time for the third one for the day ...

Just everythin was better here !
There was no snow, and I could find a nice place to sit in the sun.
And even more chasers now .. I got 27 in the log !

On the right you can see my endfed antenna, length 9.15m. The top is around 5.5m on the fishing pole (I broke the finest tip in EA8/GC and left it there , hi). The 9:1 UNUN is around 1m above ground, and also the 4m counterpoise wire is hanging at 1m over the bushes on the right, so you could also call it an OCFD or windom. 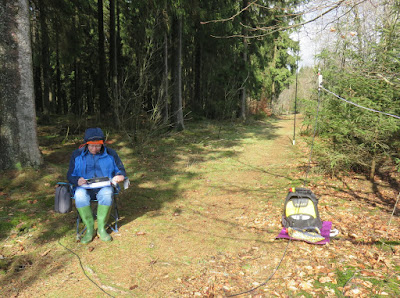 And so day one ended with 33 points nearer the MG target, only needed 17 more !

This summit is only 2 points , and gives no winter bonus points, but I had to do it to get to my goal, exactly 1000 points. Ironically, this low point summit is one of the very few in Belgium where you actually have to walk and climb a little. 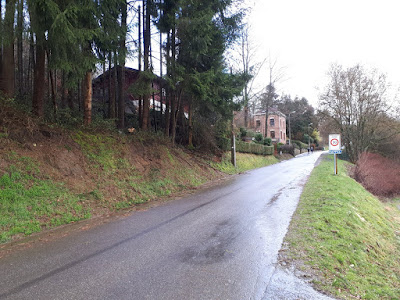 [Note: in case you downloaded the track by ON6ZQ, which used to be on the SMP site, and started near the restaurant, that is now private property, so you can no longer use it. I see that Christophe has already removed this track from the SMP]

After some 20 minutes, I got to my favourite spot, at pos 50.389985, 5.867302
There were high winds here, and it would become a real storm later on.
I quickly set up, but after a short time it began raining. I hadn't taken any umbrellas, so had to keep myself dry with only a raincoat, and protected the rig with a plastic bag and a towel.
I did take a raincover for my backpack, so all my other stuff was kept dry too.
I had to keep the activation a bit short, but still got 23 qso's in the log, including a S2S with Markus, IN3ADF. Not bad.
With all the strong winds, no time to lose, and so I went to ...

No snow or rain here, but even stronger winds, and not much protection .. so I tried do do it all as fast as I could, and keep a bit warm ... 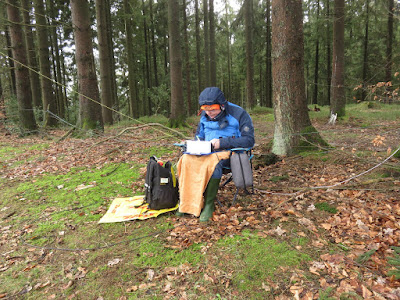 After only 15 qso's, I had enough of it, and went back to the car for my lunch and some hot coffee ;-)
And then it was time for the "grand finale" ... my mountain goat activation.

Again no time or urge to walk far away from the car to find a nice operating spot, the wind had now gotten to a force 7 to 8 gale, and I tried to stay away from any trees ... so I just set up in a corner of the parking lot, at position 50.501176, 6.093912
The whole parking lot was also muddy, and it was cold, so not a very glamorous place for this special occasion, but it was what it was ... 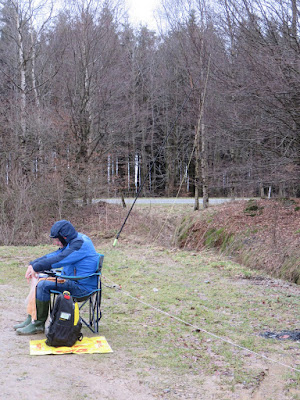 As you can see in the picture above, the wind almost blew my fishing pole axay, the antenna was  hanging only a few metres above ground. And  I found no better place for the UNUN  than to tie it to my chair, just behind my back.

I was very curious to see (or rather .. hear) who my fourth caller would be.
The luck was all for Don, G0RQL, so I had a bit of a longer qso with him, to thank him for all the previous qso's we had, and for making me a MG.

After a while, drizzle started ... so had to grab some bubble plastic and the towel again ... 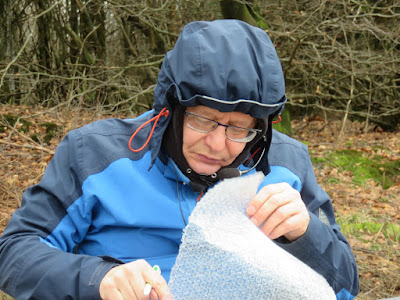 Anyway, my activation went well, with 21 qso's in the log.
This was not the weather to celebrating my MG on the summit, so I did that in the evening with a pizza and a good beer !

Thanks to all activators and chasers out there to help me this far. I hope to be doing SOTA for a long time to come ... cu all on the summits !