Ever since I made the small "Nintendo Controller" for my IC-7300 (see this post) , I have been thinking , and thinking , and thinking ... about a bigger project. I wanted to control all kinds of functions in the IC-7300, that had no dedicated button, and were too cumbersome , involving several key presses (real buttons or on-screen touch buttons).

Almost two years have passed since then, and I still hadn't started this daunting project.

In contrast to several of my other projects, which often remain in their "naked PCB" state .. this time I had one thing : a BOX !

It is an old D-link Ethernet repeater in a sturdy metal case, not one of those flimsy plastic boxes which are now so common (I see they even sell one on e-Bay for 25£ ... hi).
Here the front, back and inner of this box. 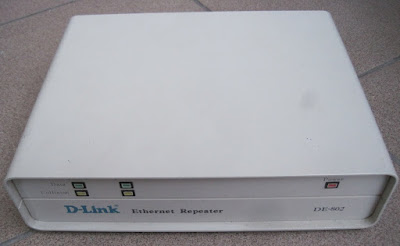 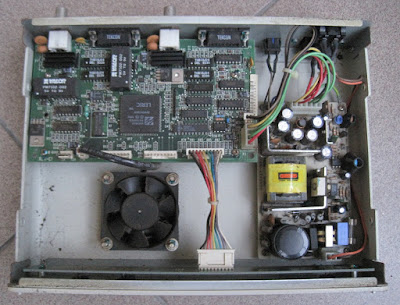 The sturdy construction, and metal shielding looked OK for my project, so I removed all the old electronics , and mounted two pieces of PCB on the original standoffs. Plenty of space to mount a linear supply (less RF noise !), and an Arduino Mega2560 (which I may have to shield if it makes a lot of noise ...).
I did keep the original Power input and switch, and the RESET button.
The power inlet does not contain a noise filter, I may change that later, if needed. 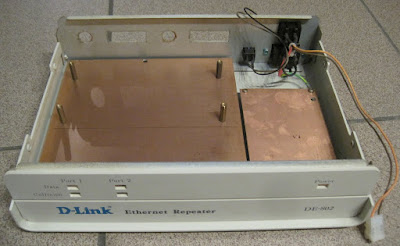 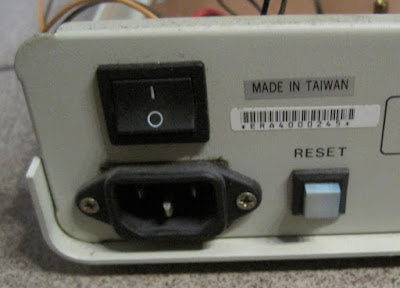 I wasn't sure if I really would needed the powerful Mega, but I wanted to try out several things, and didn't want to have to change from a Nano or UNO in the middle of the development ... and for the small price difference, it wasn't such a hard decision.

After some thinking, and consulting a few other hams that showed interest in my project, I came to this result as a first step. A FRONT panel !
Still not sure how the end product should look, I took it the safe way .. I made a mockup panel, made from PCB material (easy to drill and file etc), and mounted it on top of the original front panel. This gives a good impression of how it will work, and it is much easier to make a change in the wiring if needed. 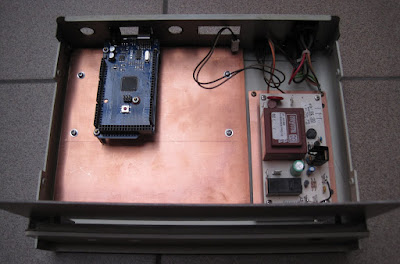 For the display, I could have chosen a touch screen, since the IC-7300 also has a touch screen.
But for this project, I chose a cheaper TFT display with 160x128 resolution, and a rotary encoder for all MENU actions. I guess it makes things easier if someone wants to copy or adapt my design.
The many buttons will control all "direct" actions, requiring only one press ! 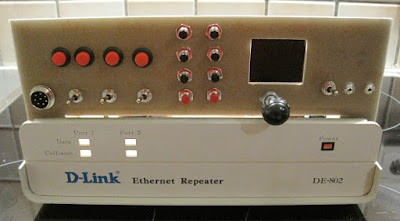 Then come 8 smaller buttons for several functions, the red ones would be a PF1 and PF2 (Programmable Functions, selectable via a settings Menu)

The black ones would be : band up , band down, cycle the band stacking registers, select power in steps 5 10 50  100W (powers settable via menu), TUNE (for using a manual tuner or external autotuner), USB out AF<>IF (for listening to DRM or using other SDR software).

TFT graphic display and rotary encoder for all MENU control and selection
I intend to use it as follows
short push = change display mode. Some ideas : analog S-meter, CW decoder,  other meter readings, the actual set parameters, time and temperature, ...
A long push on the encoder button would enter the MENU
Rotate left or right to make a selection.
Again a short push = go back one level.
A long push would  exit the menu completely.

And finally, a switch and two 3.5 mm connectors for a Heil (or other brand) headset, the switch near that connector then selects headphones or external speaker (or maybe just external speaker ON/OFF, and leave the headphone audio on all the time, not decided yet).

This is the back of the front panel ... no wires attached, so still a lot of work to do before I can even start the programming..

Now I still have to put some connectors on the back panel, where I will have lots of connectors for CW Paddle and several mechanical keys (I use a straight key, a Bug and a Cootie for SKCC operations) , CI-V to the radio, MIC to the radio, speaker input from the radio, external speaker output, input for a foot pedal, and maybe more ...

I did put the connectors in the box in December 2018, but found no time to take a few pictures, so finally , here we go. Viewed from the inside, it looks like this.

From the outisde, these are the planned connectors, from left to right :

Mains power, COOTIE, BUG, Straight KEY, Paddle and KEY out to rig KEY input. Will all be wired in parallel, function will be switched in software like in my previous "Nintendo" controller.

Then come SPEAKER OUT, SPEAKER IN* from RIG, and the CI-V connection.

* I may change the speaker input to a fixed level AUDIO IN from the 13 pin ACC connector, so to have a fixed level for a CW decoder. Then I will have to include a seperate audio amplifier in the controller .. have to think about that ....

Finally there is a connector for a footswitch and the output to the RIG's MIC connector.
Maybe this can also be done via the ACC connector, so that I can continue to use the standard hand mic or a desk mic..

Standby for part 2, where I will describe all the wiring, Part 3 will then describe the Arduino code.
Anyone wanting to help "thinking", be it hardware or software, please contact me on my QRZ.com address. This will be a project for next winter (2019) I guess ...