The day after my short SOTA tour was the DIRAGE ham rally in Diest.

Not so much to tell about the rally itself, I guess you know the picture ... a hall filled with mainly middle aged to "old" men (with some exceptions) ... and row after row of tables filled with "stuff" a ham may or may not need. 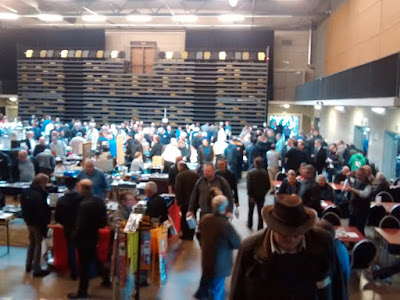 After buying a couple of items I really DID need, I went to look for the SOTA booth which was on the first floor of the building. Peter ON4UP had set up a nice exhibit of SOTA related items, with a backpack, boots,equipment, pictures, videos etc..

This was of course also the celebration of 10 YEARS SOTA in BELGIUM, so all the flags and balloons made it a SOTA Party !

I had brought my SOTA "umbrella with integrated operating table" , and some homebrew battery packs, which drew a lot of interest from the others.

And I could finally meet and see to whom  some familiar voices really belonged.
Some of the top guns were there : Karel ON4FI , Belgians number one chaser ,
ON5SWA, ON6UU, OT6V, all three also very active in activating ONFF.
And of course Peters' eternal companion in crime, and Belgians TOP ACTIVATOR ... Franz, ON9CBQ/DL3RBF was there too !
I can't name them all, but in total we were with 18 Belgian SOTA activators.

Here a group picture of some of these fine gentlemen ...


After a most enjoyable day, I went back to Ostend ... and that's the end of a short SOTA weekend !
See you next time !