This is my attempt at the Chinese "frog sounds" QRP kit.
After ordering it for exactly 9.99 EURO, it arrived some 3 weeks later. Everything was in one little plastic bag, and even had 3 sheets of instructions ! 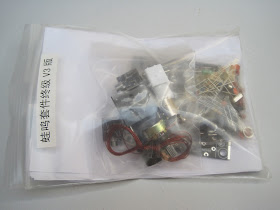 A well made PC board, and as I found out during the build ... too many components (mostly capacitors and one transistor), and one missing component, an electrolytic cap of 1µF, not too bad, I have those in my junkbox. Three sockets are provided for the IC's, nice. 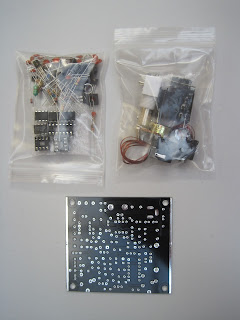 There is no real building order in the instructions, just a placement diagram and circuit diagram.
So I used some common sense and started with all the resistors ... 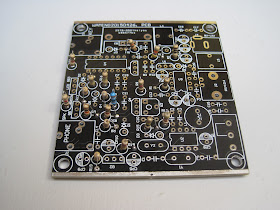 Then adding the caps and some other stuff ... 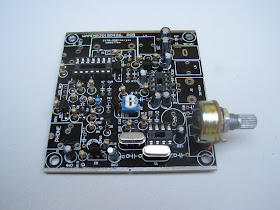 And finally all connectors, the final transistor and the two ringcores you have to wind yourself.
The final product looks like this, and it took me about 2.5 hours.
The orange wires in the picture are not from one lead, I DO have orange headphones AND a mini paddle with an orange lead ... can you tell orange is my favourite colour ? HI
(I'm still looking for ORANGE 50 Ohm coax ... anyone ?)
Btw, I use the paddle as a straight key by putting it on it's side, there is no keyer chip in this kit.
There is a Chinese kit WITH a keyer for around 15 EURO though.
(search ebay for DIY 51 Super Rock Mite RM Kit CW Transceiver Shortwave Telegraph ) 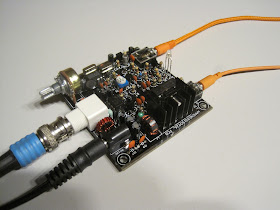 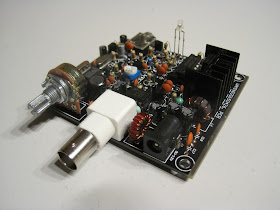 Does it work ?
Yes it does , but ...
The receiver is quite sensitive, but lacks selectivity as you can expect ...
I connected a 40m dipole and connected the phones output to my laptop running the program DSP-FIL by Makoto Mori
This program dates back to 2001 but still does a good job ... all kinds of filters down to 70 Hz.
The only thing you can't do is keying CW and listening to it on the PC .. because of the delay !
So I used my "orange" headphones, these have an extra audio output jack, and this was coupled to the PC. The sidetone of this kit is around 1000 Hz (and not so stable, still have to check which capacitors are responsible for the drift). So I put the DSP-FIL very narrow around 600 Hz, and when keying I heard myself in the headphones, while receiving I listened on the PC. Problem solved.
I called CQ and after 3 times calling , a G station answered and I got a 559 report ... wow !

So I was curious at what power I really had made this QSO with.
My Bird wattmeter is too inaccurate at this level (I only have the 100W element).
So I measured it in the school lab as 820 mW ...
Maybe not too bad, they advertise 2W out, but maybe they mean 2W INPUT , and the circuit values indicate it was designed for 1W  output.

In the mean time I put the PCB in a nice aluminium box, and printed some labels, then put them on the box with clear Scotch tape. 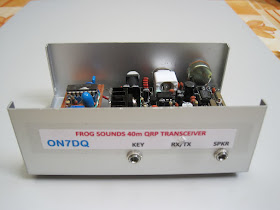 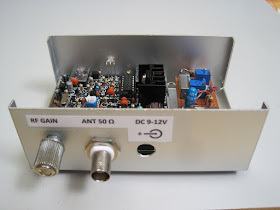 I also added a audio CW filter I had made long time ago, to avoid the use of the PC as a CW-filter.